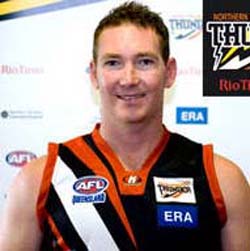 The NT Thunder have plenty to look forward to in the NEAFL premiership season if today’s 15-point win over Morningside is any guide.

The Thunder play Aspley in the season-opener at TIO Stadium next Saturday night and will take plenty of confidence into the game.

Coach Murray Davis was delighted with his side’s effort at AAMI Stadium.

“When you take into account all the variables, I am very happy,” Davis said of the victory, which was screened on national television.

“When you consider we were on a 20 to three flight out of Darwin and were having our first hit out as it team, it was good, even though we were probably a bit lucky at stages.”

Davis said there was no doubt the Thunder players enjoyed having superstar Andrew McLeod in their midst.

“I reckon they did appreciate being around him, just with his experience and he is such a classy player,” he said. “Collectively, I think they all enjoyed the way they went about the game.”

Davis agreed the influence of forward Ross Tungatalum was important.

“He set the game up early,” Davis said.

He pointed out that there were eight newcomers to the Thunder in the side and that a number – including star ruckman Kenrick Tyrrell – were in line for selection next week.

“That makes my job as coach very tough, but that’s good,” Davis said of what will be an interesting selection meeting this week.

Morningside boss John Blair lamented some un-Morningside-like errors during the game, where the Panthers looked poised to challenge at different stages.

“We made some errors under pressure at critical times,” he said. “We would claw our way back and then make a bad decision with a kick, or handball when we should have kicked.

“We probably didn’t pay enough attention to a couple of our match-ups, although they knew a lot more of us than we did about them.

Blair was particularly pleased with the shut-down effort of former Division 2 player Caleb Brown on Thunder star Darren Ewing, the lively effort of Shaun Mugavin and some good signs by young Peter Mollison.

The Panthers face the Brisbane Lions Reserves at Esplen Oval next Sunday and will be much better for the hit-out.

“We will have got some of our brain and awareness back – this is by far the hardest hit-out we’ve had this pre-season,” he said.