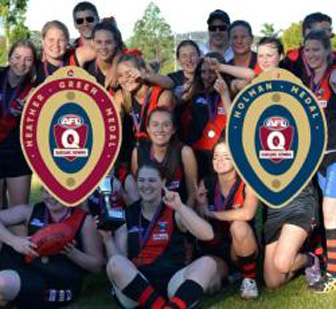 Dalby’s Peltz family has been rewarded for their outstanding contribution to Australian Football in the region with the Darling Downs best player in the McDonald’s Trophy under 12’s to receive the Peltz Medal.

All junior grand-final best on ground medals have now been in named to recognise the outstanding service of key volunteers on the Darling Downs. 2007 inducted life member Kim Thomas now has the Under 14 best on ground medal named after her. AFL Darling Downs under 18 Crows stalwart Michael Langfield has been rewarded for his efforts over a decade to the regions now no-more top age program with the best on ground in the Under 16 Grand-Final to receive the Michael Langfield Medal.

The regions current Regional Manager Keith Webb has been recognised for his outstanding service, which spans for more than 10 years with the Under 12 best on ground for the Grand-Final now the Keith Webb medal.