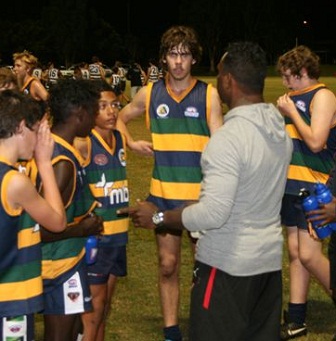 Colour, nor culture, bore any barrier for a special group of boys who recently took part in the Narangba Valley Vipers AFL Academy and Tiwi College cultural exchange.

Touring through south-east Queensland, boys from both schools immersed themselves into each other’s culture, creating an extraordinary bond based initially on football but finishing strongly on equal terms as friends.

Tiwi College started their Queensland experience with a visit to Narangba Valley High School and took part in mainstream classes that included a music workshop, where the boys utilised computer programs to record a rap song. Music coordinator Paul Berardi rated the musical talent within the group as amongst the best he heard at the school.

After a combined training run with their new teammates, the self-named ‘Tiwi Vipers’ combine side consisting of half Viper players and half Tiwi College players took on Nudgee College in an exhibition game under lights at Zillmere.

With names like Rioli and Wonaeamirri in the team, a highly entertaining game pleased all spectators, with the Tiwi Vipers sneaking home to record a nine-point win. After the game players from both teams enjoyed a barbecue with a chance to mingle with each other and get excited about a rematch next year.

The following day the Tiwi College students joined 20 Narangba students to begin a Leadership and Cultural camp, with a first-stop visit to Burnside SHS to share time with their Volleyball Academy.

Channel 7’s Sunshine Coast bureau joined in the festivities by interviewing students from both schools in a memorable experience for all involved. The boys trip was beamed across Sunshine Coast television that evening, showcasing the cultural exchange and the powerfully positive message that comes with it.

Next stop was out to Cherbourg State School, an Indigenous community in the South Burnett Region. Boys from Narangba Valley ran their annual Cherbourg AFL clinic with the help of senior Tiwi College students for the rugby league dominated school, providing an opportunity to mix in with another group of talented young people. A game at the end provided a glimpse of future athletic prospects in an area that has produced names like Tonga and Sandow.

Settling into camp that evening provided a real turning point for the exchange, with the boys given free time to socialise, play games and mix with one another, learning more and more about each other’s lives and culture.

A new day saw another opportunity for the Tiwi Vipers to play together with a visit to Maryborough to take on a Wide Bay representative side.

Coached by Viper senior students Ryan Manson and Mitchell King, the football on display was simply breathtaking, with Tiwi’s Adam Tipungwuti and Jack Munkara taking it up a notch with scintillating runs off half back to help the Tiwi Vipers record another win.

The win was celebrated with singing and laughing all the way back to camp, and further on into the evening around a camp fire.

After days of reassuring most of Tiwi boys that south east Queensland beaches are free of crocodiles and deadly stingers, the last day together for the Tiwi Vipers started with surfing lessons at Noosa.

It was fair to say that the boys from both schools should stick to footy, however all boys had the times of their life learning a new skill away from the comforts of a football field. For the Tiwi College students it provided an opportunity to enjoy the ocean away from the dangers that are so often present in the far north.

The final stop of the tour was to the Gabba as special guests of the Brisbane Lions as they took on the Sydney Swans. Boys from both schools continued to enjoy each other’s company, with the real possibility of maybe one day returning to the Gabba to watch a member of this year’s Tiwi Vipers group playing at the elite level.

Narangba Valley AFL Academy Director Greg McMahon could not have been any happier with the way the week panned out.

“All the boys mixed tremendously well, forming not only lifelong memories, but hopefully lifelong friendships,” McMahon said. “The success of this cultural exchange highlights the very reason why we do this, to provide an opportunity for young men to step out of their comfort zone, challenge social stereotypes and create rewarding opportunities to experience and value others cultures.”

On the existing relationship already shared with the Tiwi community, McMahon added: “Each time we share time together with the Tiwi College, it blows my mind how powerful AFL football can be in helping create bonds between young people, which then opens the door for so much more opportunities to close the gap between Indigenous and non-Indigenous youth.

“It simply helps in setting up a positive attitude and perception for the future of our nation regarding cultural differences and valuing each other as equals.”

In August the Tiwi College will play host for the Vipers when they will immerse themselves within Tiwi Island’s life and culture.

Year 12 student Ryan Manson said he can’t wait to get back up there and catch up with old friends.

“That in itself is motivation enough to grow this concept even further,” McMahon said.