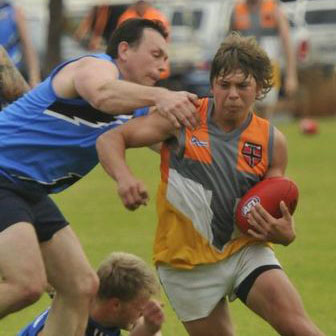 A hard-working Country side has out-run the best of Toowoomba in a highly-skilled representative affair on Saturday afternoon.

The Country side – playing in South Burnett’s bright orange Domestic Violence Awareness strip – got out to an early lead, kicking 5-goals-to-2 in the opening quarter.  Troy Millard (Goondiwindi) was able to give Warwick’s Brendan Iles first use early while Chinchilla’s James Kratzmann also got a number of early clearances.

As the rain picked up into the second quarter the match became a tight tussle, with clear footy coming at a premium.  Warwick’s resurgence up the Allied Pickfords Cup ladder was showcased as Tyhe Clarkson and 17-year-old Tim Tate provided plenty of run off the wings to ensure the boys from the bush lead by 11-points at the main break.

Coming out after half-time, the City side appeared to mesh together as they hit the front by as much as 9-points before conceding two late goals to trail by 3-points at three-quarter time.  Steve Harbort (Tigers) & Christopher Davis (University) were able to extract some contested football, providing Chris Guice Medal winner Phil Driese (Coolaroo) with clean possession through the middle of the ground.

An inaccurate final quarter plagued both teams, however with 4-goals-to-1, the Country side ran away to win the match for the first time in 14 starts.

AFL Darling Downs President Andrew Foley praised the event, saying the day was a great way to showcase the sport in our region.

“Second Saturday in May, it’s here to stay” said Foley after the match.

The event provided a good stepping stone for the event which is set to expand in 2014 with new guernseys for both sides and the potential for Under 14 and Under 16 curtain-raiser matches.

It’s not too late to play junior or senior football in the Darling Downs.  To find your nearest club, head to the ‘Clubs’ tab on the homepage or call the AFLDD office on (07) 4632 2994.