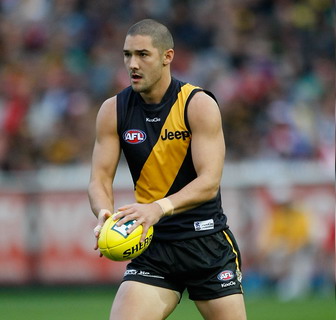 The countdown to the Toyota AFL Premiership Season Match in Cairns between Richmond and the Gold Coast SUNS is on, with less than three weeks to go until match day.

Richmond player Shaun Grigg was in Cairns this week to enjoy some time off during their bye and as well as to scout out the best attractions and activities for Tigers fans who are planning to join the team on the trip.

The Round 16 match coincides with the Victorian school holidays and is the perfect place for Richmond fans to escape winter.

To be played at Cazalys under lights, the match will be the first twilight AFL game staged in Far North Queensland, and Richmond are expecting strong support from the Yellow and Black army both within the region and from interstate.

“Cazaly’s is a great venue, and for our fans, they can combine all the fantastic attractions like the Great Barrier Reef with AFL in one hit.

“Given the match is played during school holidays in Victoria, it’s a great opportunity to support the team and get away from winter’” Grigg said.

Grigg visited Saint Augustine’s College as part of his two days in Cairns. Students from the school will be competing in a regional AFL secondary school competition during the same week as the match, with the grand final played as the curtain raiser to the Richmond v GC SUNS match.  The U14’s team has also just won through to the final of the GC SUNS Cup and will travel to the Gold Coast in August to compete.

Over the past two days, Grigg and his partner Sarah Edwards have been visiting local tourist attractions to film a short video clip for Tigers fans and to promote the AFL’s holiday booking site anygameanywhere.com.au.  With the support of local operators including the Holiday Inn, GBR Helicopters, Big Cat, Green Island, and Tourism Tropical North Queensland, Shaun and Sarah have enjoyed a break away from the routine of the AFL season.

Tickets for the match continue to sell well, with nearly all grandstand seating gone. There are plenty of General Admission tickets left and fans are urged to buy now to avoid queues.  Prices start at just $22.50 for adults, $5 for kids 15 years or under or $45 for a family of four. Booking fees apply. Tickets can be purchased from:

Fans planning to travel to Cairns for the match can also book the best available airfares, a range of affordable accommodation and match tickets by visiting the AFL’s travel site www.anygameanywhere.com.au

The Toyota AFL Premiership Season Match in Cairns is supported by the Queensland Government through Events Queensland as part of a growing calendar of sporting, cultural and regional events across the State.