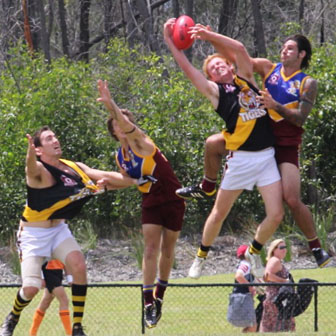 The Moreton Bay Lions and Redcliffe Tigers will continued their storied rivalry in the fifth annual Councillors Cup.

The Cup will serve as a curtain-raiser for the NAB Challenge game between the Brisbane Lions and Saint Kilda at the Moreton Bay Central Sports Complex on Saturday February 28.

Redcliffe Tiger Dave McInnes said he expected his team to do better this year.

“We have a few new recruits, we’re fitter and hopefully we can use that to our advantage,” he said.

He said he didn’t know what to expect this year as the Lions are in another division but was keen to get the cup back.

The rivalry will take a new twist this year as coaching fellows become bitter rivals.

Humpherys said he was looking forward to coaching against his former mentor.

“I guess i’m excited and nervous but I have the upmost respect for Rob,” he said.

Humpherys said he understood the challenges his team will face against a strong Lions side.

“We are under no illusions that they are a strong team but we believe we have recruited well and will be ready for the challenge,” he said

Even facing a strong side Humpherys said that preperation had been good with an emphasis on blooding new people while making sure the club was based around the community.

He also said that he understood the importance of the cup.

“You want to treat it as just another game but you understand that there is a lot of history behind the two clubs,” he said.

Former Redcliffe Tigers junior Liam Dawson is up for selection for the Brisbane Lions.