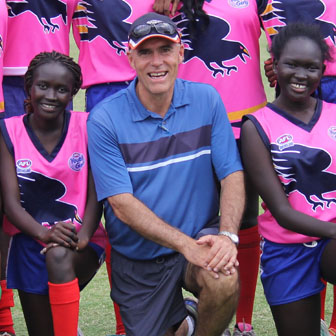 Nicknames have the habit of embellishing, yet for Ross Savill, being called the “Pied Piper” could not ring more true.

In a relatively short space the time, the Toowoomba social worker and youth pastor has transformed the local junior football landscape into a cultural melting pot.

For Savill, it was the interest of his son Jackson in joining the NAB AFL Auskick program that sparked an interest in AFL.

Since that defining moment, Savill’s social trailblazing with the University Cougars JFC led to a swathe of individual honours, including two Queensland Auskick Volunteer awards and most recently, the 2014 AFL Queensland Community Ambassador of the Year award.

It all started with a chance encounter with a young Sudanese boy kicking a footy outside his church.

Following his offer to drive him to training with his junior side, Savill was pleasantly surprised to find the boy had brought two friends along.

A week later two more came along for the ride.

And it grew from there.

Cougar’s club president Kelli Boltan was in awe of Savill’s recruiting prowess, with junior exploding from 10 to 103.

With close to half of all registered juniors coming from multicultural backgrounds, footy provides Savill with the perfect vehicle for promoting community spirit.

“He’s that bridging gap between sport, inclusion and reality”.

Savill’s work away from the football field also shows his desire to help the local community.

Together with his church, he provides a platform that incentivises education within the refugee community.

“He brings them in and holds homework classes every Wednesday,” said Shengare.

“And the kids have to complete their homework to play on the weekend.”

But his goodwill does not stop with the children.

With the help of the wider community, including retired teachers and education students, a helping hand has also been extended to their parents.

With many speaking upwards of five languages but little English, Shangare said it has had a positive impact on families.

“For them to take the time out to guide the participants…it’s made it easier for some of them to get jobs”, said Shangare.

“Not only are their communication skills improving, but so are their social skills”.

“It’s all these elements coming together over sport. Family, education… it has a kind of trickle-down effect.”

By appealing to common values, Shangare believes that Savill embodies the code’s mantra, ‘Many cultures, one game’.

“With multicultural communities, it is about the family unit as well as education, and he’s brought those two parts together”, said Shangare.

“And then there is the health part as well, which comes through sport.”

“So despite the different cultures and backgrounds, through sport, education and family, he has brought cohesiveness to the community”.

By bringing families to the football field, Savill has certainly lived up to his nickname the Pied Piper.

“AFL is about mateship”, said Shangare.