Community heroes lace up their footy boots for annual clash 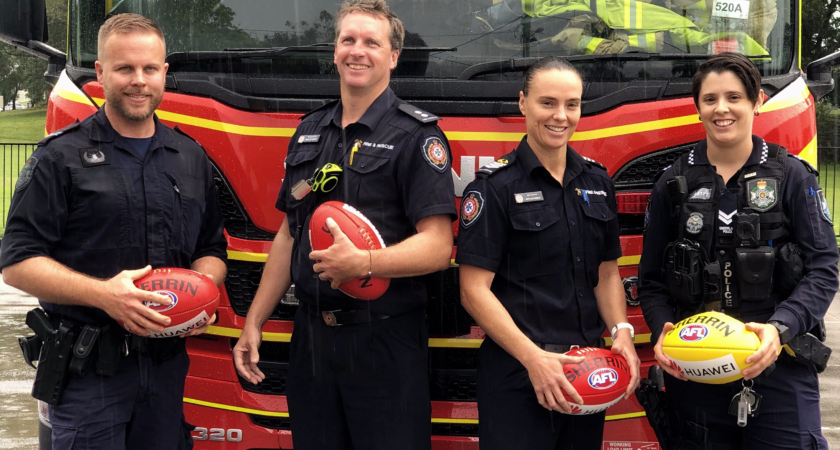 QFES will go into this weekend match with extra determination to claim victory after a dominant QPS walked away holding the trophy last year.

Ipswich Firefighter and QFES AFL Coordinator Matt Dillion, said the rivalry was strong and would be on show at Saturday’s game.

“We already know we have one up against the cops because everyone loves fire trucks and firies!,” he said.

“It will be a big game on Saturday – both teams will be playing for the win, there is no doubt about that.

“We are a big chance; we are a lot hungrier than last year – we have trained hard and will be giving it a good crack.

“Some of the boys hadn’t played before last year’s match so a year on it’s been good to train together and develop our skills further.”

Matt and his teammates won’t be the only players gracing the field, this year will see the addition of an Emergency Services women’s clash for the first time.

“It’s sensational because it reflects our workforce of men and women – we all do the same job; we all have the same responsibilities so it’s great to come together and both have a team,” he said.

“The nature of shift work means we can’t always get to the men’s/women’s training so we are able to go along to each other training sessions and build relationships we may never have had.”

Senior Firefighter Natalie Thomas said it was exciting to have women from all over the state coming together to play this weekend.

“We are lucky to have several firefighters who have been playing in the local QAFLW for a number of years and are looking forward to this opportunity,” she said.

“I’ve really enjoyed the comradery between both the men and women’s sides, it’s been great to get to know everyone and hopefully we can make the women’s match an annual event.”

The action will kick off this Saturday at 3:30pm followed by the second match at 5:00pm. There will be fire and police special vehicles on display along with QFES/ QPS career information plus giveaways for the whole family.