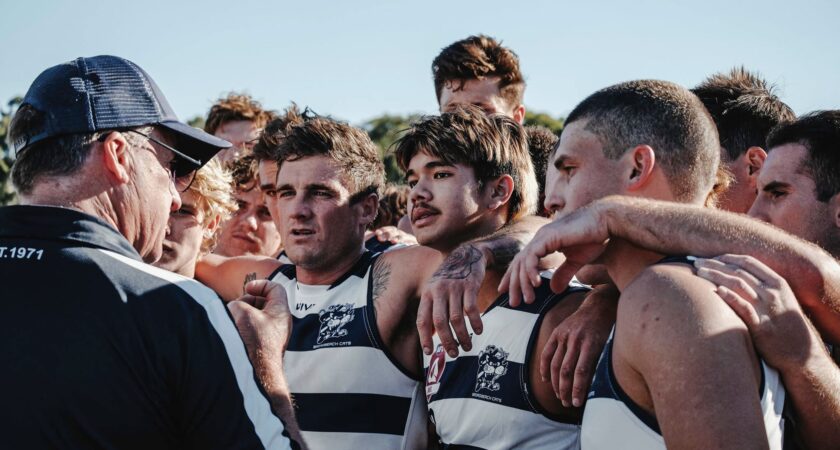 By Chris ‘Yeendy’ Yeend
Broadbeach has secured the opening spot in the 2021 QAFL Senior Football Grand Final at Southport after an inspiring four-point win over Labrador on Saturday.
After kicking 3.12 in the first half, the Cats responded better in front of goal in the second half to secure a famous win and take themselves one step closer to redemption from last year’s 2020 Grand Final loss to Morningside.
The Tigers finished the home and away season as minor premiers after a remarkable turn-around from last season thanks to the coaching efforts of for 2012 AFL premiership hero Nick Malceski, and they earned the right to host last year’s Grand Finalists.
Labrador got off to the ultimate start when key forward Bryce Retzlaff found himself in space deep in the left forward pocket thanks to a nice kick from Pierce Hanley.  He kicked the opening goal from a tight angle to kick-start the Tiger-machine.
Labrador was efficient at one end of the ground, Broadbeach on the other hand couldn’t buy a goal after a several missed opportunities. Hanley added a second on the board after hurting the Cats on the counter to open up a handy lead. Retzlaff added his second just before time-on and the minor premiers sprinted to a 20-3 lead.
Cody Harrington kicked truly to open up the account from Broadbeach early into time-on from about 30 metres out to give Broadbeach some momentum heading into quarter time.
With overcast and sometimes tricky conditions with the wind making life difficult for players on both teams, it was Broadbeach that looked the stronger team in the second term. With plenty of drive from its midfield and run from Lucas Jellyman-Turner, the Cats piled on nine-scoring shots to three to turn a 10-point deficit into a six-point lead at the half-time break.
The margin would have been greater if not for poor kicking with the Cats slamming home 2.7.
Labrador burst ouf the blocks early in the third term with Leigh Osborne kicking truly from a set shot 2.5-minutes into the term, ending a streak of 45-goalless minutes. Goldsmith kicked his second from around the body moments later and the Tigers opened up a handy six-point lead after their forward line was starved of opportunities in the second term.
The third quarter is often saved for memorable moments and it was Broadbeach spearhead Jordan Moncrieff that took centre stage when he bagged two goals in as many minutes to swing the lead back in favour of the reigning Grand Finalists.
The game started to open up a bit more in the third with both teams trading massive blows. Labrador dominated most of the inside 50s but it was their turn to struggle with accurate kicking in front of goal with 4.4 for the term to hold a slender three-point lead heading into the final change.
Moncreiff put the Cats in front early in the final term with a remarkable set shot from the boundary line 40 metres out for his fourth goal of the day. Jackson Fisher added another from a set shot mid-way through the term as Broadbeach opened up its biggest lead of the day, 11-points, 12-minutes into the final term.
Cooper Anderson took centre stage and made it his moment for Labrador when he kicked back-to-back goals just before time-on to thrust his team back into the lead by one-point.
Cometh the man, cometh the moment; Broadbeach captain Josh Searle sprinted from half back to create space inside the forward 50 as his team mates steadily pushed the ball forward. Unopposed for what felt like an eternity, Searle gathered the ball and snapped around the body on the left foot as the ball bounced through miraculously for goal to put his team in front.
The last minute was as hectic and as chaotic that you’ll see in a game this year. Labrador continued to pepper the ball inside the forward 50 and Broadbeach continued to bomb the ball out to half back in desperation. The siren sounded just as the ball was cleared in front of the scoreboard as Broadbeach saluted and pounced its way into another Grand Final.
Broadbeach 1.5, 3.12, 6.13, 9.17 (71) defeated Labrador 3.3, 3.6, 7.10, 9.13 (67)
Goals: (Broadbeach) J. Moncrieff 4, B. Lowe, S. Jasper, J. Searl, C. Harrington, J. Fisher 1.
(Labrador) B. Retzlaff 2, P. Hanley 2, C. Anderson 2, J. Goldsmith, C. Ford, L. Osborne 1.
Best: (Broadbeach) R. Gilmore, L. Jellyman-Turner, M. Lower, B. Lowe, H. Arnold, J. Moncrieff.
(Labrador) A. Mckay, P. Hanley, K. McMahon, D. Fyfe, J. Kenny.
Picture by: Brooke Sleep
2021 Byron Bay AFL9s Invitational cancelled
Queenslanders to feature in Brownlow Medal count and a look back at its history