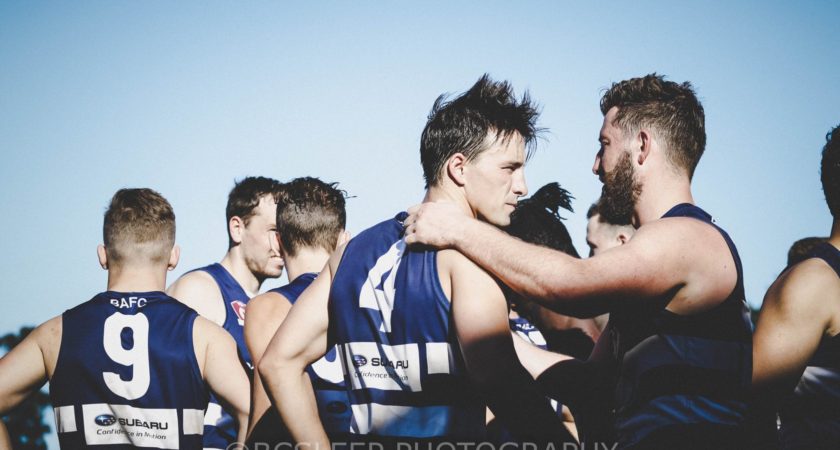 BROADBEACH have broken a lengthy drought by qualifying for the QAFL Grand Final, their first premiership decider since 1996 when they won the GCAFL flag.

The Cats again defied the critics by making light of a significant injury list when they smashed disappointing Morningside by 16.12 (108) to 5.10 (40) in the Preliminary Final at Subaru Oval on Saturday.

Originally having to make four changes after losing Ryan Pantic (spleen), Benji Neal (shoulder), Nelson Sorrensen (ankle) and Luke McGuane (hamstring), the Cats were thrown into disarray when key utility Jimmy Royes busted his ankle when riding a bicycle on Thursday night and colliding with a car.

If anything, the loss of so many players served as motivation for their team mates because they simply destroyed the Panthers from the opening bounce.

Beating Morningside was not a surprise at all. But the winning margin of 68 points definitely was.

And so Broadbeach are into their first flag decider since they beat Labrador in the 1996 GCAFL grand final at Merrimac Oval (Subaru Oval).
That was when current coach Brett Andrews was co-captain and Jason Cotter was coach.

After winning the toss on Saturday and running with the wind, the Cats put on 6.5 to nil in the opening quarter.

If the Panthers were to have a show they needed to use the wind advantage the way Broadbeach did. They didn’t.

From 41 points up at quarter-time, Broadbeach stretched their advantage to 58 points at half-time with the visitors able to kick only 2.4 for the term.

That margin was stretched out to 81 points at the final break and it was simply a matter of running out time.

Andrews surveyed the scene, which included an ankle injury to back-up ruckman Shawn Watson, and went into preparatory mode for next weekend at Yeronga, wondering what his team will look like by then.

Yet he was stoked by the way his speedy team dismantled the physically stronger Panthers.

His defenders, in particular Nathan Quick, brothers Darcy and Ryan Denjies and Alex Rayner, were outstanding.

“Evan Panozza was fantastic as well. He gets under the radar but he has the ability to feed out handballs to support players at the contests,” Andrews said.

And another winner was teenage ruckman Matt Conroy, who had to go solo against two big men in Peter Mollison and Will Wolbers when Watson broke down.

It was a strange season in many ways for the Panthers who, on their day, were as good as any team in the competition.

But on their bad days they were, to put it mildly, just plain bad.

For instance they beat Mt Gravatt by 100 points in one match, but they copped a 100-point hiding from the Western Magpies in another.

They also lost in a massive upset to bottom side Sandgate – that was the Hawks’ only success for the year.

Coach Steve Wildschut had no excuses, acknowledging Broadbeach as far too good on the day against a side that basically lacked pace and were showing signs of age.

“I think the difference between the top two sides and the rest of the competition stood out today – and they were the top two for a number of reasons,” he said of Palm Beach Currumbin and Broadbeach.

“We’ve had a long campaign – we’ve sort of been going elimination finals since about round five or six and I think we didn’t have enough in the tank in the end.”

Club match record holder Kent Abey called it a day after 305 appearances in the red, white and black and despite the humbling loss, the 37-year-old had a chance to farewell the QAFL when he had a shot at goal near the final siren.

It would have been nice for him to kick a goal with his last touch in the game but the ball did not co-operate.

Still, the respect that Abey commanded in the game was recognised when Broadbeach players formed a guard of honour in a fitting farewell for him as he left the ground.

PALM Beach Currumbin and Broadbeach will clash in both firsts and seconds on Grand Final day next Saturday after the Lions downed Labrador in the reserve grade Preliminary Final at Subaru Oval.

Labrador did not kick another goal until the third quarter, so complete was the stranglehold the Lions had on them.

Brad McDonald, who was in last year’s PBC senior grand final team, kicked four for the Lions who had former Southport NEAFL utility Lachlan Ritchie among their best.

Luke Marshall and Jaydan Verdorn were two others who stood out in the strong PBC effort.

For Labrador Matt Watmuff, Nate Kennell and Hayden Greentree battled hard but the Tigers really struggled against a side that moved the ball wide and with pace.

PALM Beach Currumbin’s colts will join the club’s seniors and reserves for a tilt at triple premiership flags at Yeronga next weekend.

The PBC Colts joined their clubmates for Grand Final day after beating Wilston Grange by 11.15 (81) to 3.7 (365) at Subaru Oval on Saturday.

But after the long break the Lions put on 7.9 to 2.1 for a convincing win.

The Lions now play Western Magpies, the only Brisbane side involved in grand Final day, in the premiership decider at Leyshon Park.