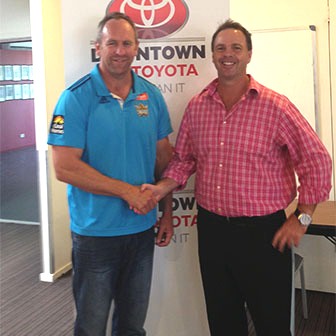 A former Panther of a different kind took centre stage at Morningside last week, at the club’s Business Breakfast.

Cartwright, who played 184 games for Penrith, 18 Tests for Australia and is now in his sixth season as Titans coach, is revered in the sports and is a highly respected rugby league coach.

As a player, Cartwright made one half of a lethal forward duo alongside Mark Geyer, playing in back-to-back grand finals in 1990 and 1991.

The eight-time NSW State of Origin representative spoke openly about his experiences as both a player and a coach, sharing many of his coaching philosophies with the breakfast guests.

Interviewed at the breakfast, Cartwright spoke openly about the highlights and challenges or top flight rugby league from both a playing and coaching perspective.

Morningside president David Diamond said those at the breakfast, which was organised by the Morningside Past Players and Supporters, were impressed by Cartwright’s willingness to share so many stories.

“It was great to see a professional coach give up his time to speak with the business leaders around the club,” Diamond said.

“The Past Players & Supporters Group are an integral part of our organisation and have been a fantastic support to the club with what the bring in regards to business lunches, breakfast and reunion functions.

“I encourage all our former players to join the group. It is refreshing to see a lot of former players around who still have a deep love for the Panthers.”

If you would like to become a member of the Panthers Past Players and Supporters Group contact Club Development Manager James Johns on 0418 127 385.