Carseldine back leading from the front 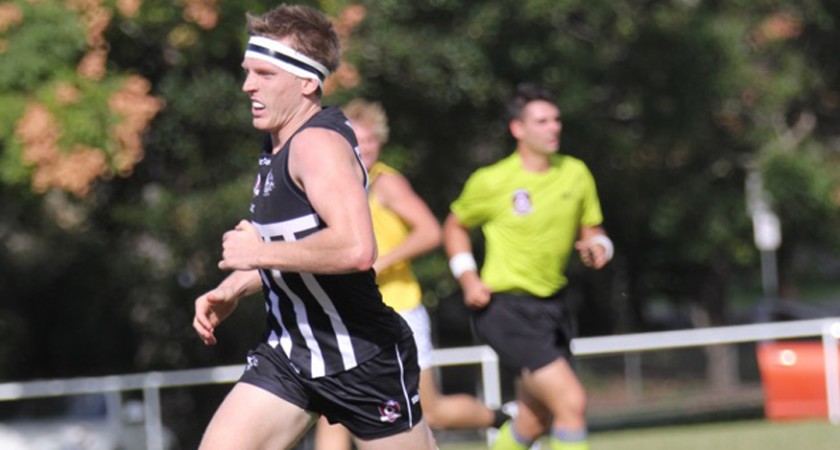 When the siren rang at the end of round 1 in 2015, Cal Carseldine finished his first full game as co-captain of the Western Magpies.

What makes Carseldine’s situation unique is that 2015 is his second year in the job.

Round 1, 2014, his first game as captain ended prematurely after he tore his ACL in a freak accident during a marking contest.

“I heard it crack and I knew something was wrong, I was praying it wasn’t the worst,” Carseldine said.

His first season as captain may have ended before it had the chance to get underway, but it wasn’t all doom and gloom.

“At the time I thought it was the end of the world, as is always the case, but looking back there have been heaps of good things that has happened as a result,” he said.

Instead of taking a backseat, he stayed involved with the club, working in an off-field leadership role.

“I stayed involved in the club last year, I was still able to do some leadership stuff off the field, I didn’t just walk away,” Carseldine said.

“Lachie Woods did the majority of it last year, but I still felt like I contributed.”

It was no surprise when he was re-elected as captain in 2015.

“I was always hoping to get the co-captain role again, and after doing the whole pre-season, I wasn’t shocked,” he said.

Carseldine see’s the big picture when it comes to leading the Magpies, placing great importance in his role to the club, and community.

“It’s an honour because I’ve seen previous captains and the types of humans they are because of being captain,” Carseldine said.

“I have been involved with the Maggies for four years. I’ve seen Micca (Chris Mihalopoulos), who was our previous captain, just who he is amongst the community and what he has done at the club, even now that he is retired.”

At just 23, walking away from the game was never on the cards, instead, he turned his attention immediately to the rehab side of things.

“I never questioned not coming back, I never considered retirement. I always thought I’m still only 23, my best years are still ahead of me,” he said.

“I was on the phone to guys I knew that had done it, seeking advice. Footy was always something I wanted to keep pursuing.”

Before the injury, Carseldine had returned to the Magpies after a two year stint in the NEAFL with Southport.

He required a shoulder reconstruction at the end of the 2013 season, meaning an interrupted pre-season dented his chances of making the NEAFL list for a third year.
“I probably wasn’t good enough to make the list on reputation alone after a modified pre-season, so I decided to come to the QAFL to play, with the goal of still getting back into the NEAFL,” Carseldine said.

After months of extensive rehab, when day one of the pre-season rolled around, Carseldine wasn’t just going through the motions, but showing the rest how it’s done.

“I was running day one of pre-season,” he said.

“We came back and did the beep test, I ended up winning it, which was probably because I was still doing my rehab while all the other boys were off getting fat.

“It was still a slow process but it gave me a little bit of confidence.”

As the pre-season continued, and Carseldine’s contact work increased, there was one box to tick, playing.

That opportunity came in the Alpha Sport Pre-Season Cup, in their week 1 clash with Morningside.

Carseldine spent the first half on the pine, before finally getting a chance to run out with the boys.

“For the first half I was absolutely wetting myself. I tried not to show it but I think everyone picked up on it,” Carseldine said.

“At the time I wasn’t too focused on how I was going to play, just on getting tackled in a game and being okay with.”

After not playing a full game of footy in over 18 months, he could be forgiven for his first touch back.

“The first time I picked up the footy I didn’t know what to do with it, I got done holding the ball, so that was a nice little reintroduction to footy,” he said.

“The biggest thing to come out of the game was to put any doubts to rest on the strength of it.

“It’s gone now, I don’t fear getting tackled or fear anything like that.”

A team on the rise, Carseldine is upbeat about the Magpies chances in 2015.

“I just want us to play finals, get us in the hunt,” Carseldine said.

“It’s going to take us some time to string consistent wins together, but I feel like our team is good enough at our best to go with any of the other teams.”

In his first three games of the year, he hasn’t missed a beat.

Carseldine has been amongst the Magpies best in each game, and had a direct hand in their first win of the year on the weekend against Broadbeach.