Carbone caps off incredible 2015 with B&F 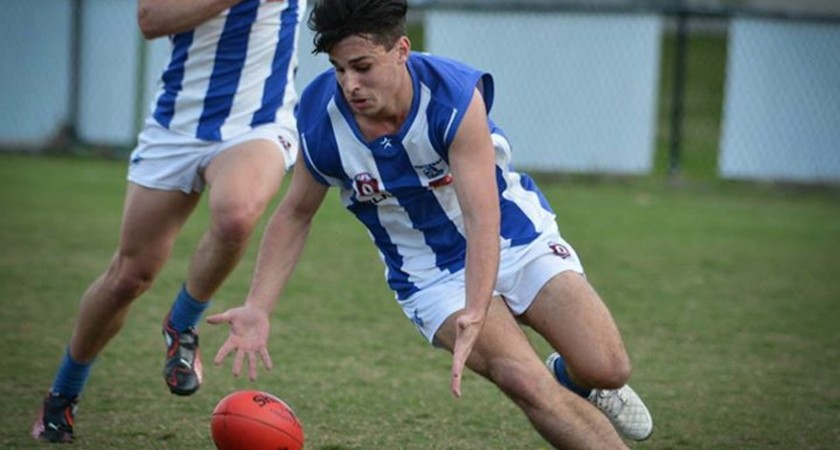 Six months ago, Todd Carbone announced himself to the QAFL world as a star. Six months later, he isn’t just the QAFL Rising Star, he’s also a Mt Gravatt Best and Fairest winner.

Carbone doesn’t belong in the category of one to watch in the future anymore. He now is right in the mix when it comes to the best in the league.

He certainly didn’t see this rise to fame coming 12 months ago, nor did he expect to take out the gong.

He lit up the outside of the contest this year. It’s no coincidence that the Vultures played their best footy in 2015 when their running game was on song, something Carbone had a big say in.

Going into 2015, he kept his goals pretty simple.

“I wanted to break into the midfield permanently, and then from a team perspective, we wanted to play finals, but unfortunately the latter didn’t happen.

Despite a solid 2014 campaign, the more he got his hands on the footy early in the year, the more comfortable he felt.

“At first when you play senior footy you’re a bit shell shocked. All of a sudden you are lining up next to blokes who you’ve watched and who you know about, and when you start to realise you can run with these blokes, and get your hands on the footy it’s a definite confidence boost,” he said.

Reality says that Carbone didn’t just break into the midfield, he strapped it to his back at times, but it wasn’t until round 10 that he truly felt at home.

“It was probably against UQ at home. I had a fair bit of it, and that was when I kind of figured out I could play within our midfield group, which was really good,” he said.

That meant a few things had to be tweaked in terms of how he went about things.

“There’s a bigger workload. If I’m playing a full game in the midfield rotation I had to pull my weight, and work a lot harder. I started doing a lot more stoppage work at training and trying to learn in every way possible.

He puts his success this year down to a couple of factors, actually, a couple of key people.

“The coach (Brad Pollock) believing in me, and leaving me in the midfield for longer periods, and Mick Hamill was a big help in the midfield throughout the year. I probably couldn’t have done it without him if I’m honest,” Carbone said.

In a scary thought for the rest of the competition, the 20 year old believes he has still got plenty to work on over summer.

“Improving the defensive side of my game and my work rate will be the key. My skills still have a little bit to go, but I’m looking forward to the year ahead.

Any kid who can take out a best and fairest by 20 is going to have a big, big say in the years to come.