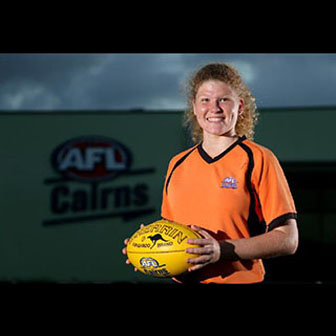 LIKE a midfielder racking up 45 touches a game, umpire Meg Pullinger has forced her way into a promotion and in doing so, the AFL Cairns history books.

The 16-year-old will become the first female senior field umpire in the league’s history when she stands in the Cairns Saints v South Cairns Cutters clash at Griffiths Park today.

A keen player, Pullinger could not start umpiring this season until finished with her representative commitments with the Cairns women’s team.

But she has made up for lost time to rank as one of the top four umpires in the last month to force umpires boss Matthew James’ hand.

“I thought I’d keep her in reserves for most of this season. I was not planning on doing it this soon. But she gave me no choice,” James said.

“Forgot the fact she’s 16 or is female, on a performance basis she’s been one of the best every week for the last month.”

Each round the umpires are given a rating on their decision making, game management, positioning and communication.

While James said her eye for a free kick was second to none, it is her rapport with players that sets her apart.

“She’s got a knack for a free kick but she has this amazing calming effect on players,” he said.

“I’m not sure what it is. Maybe it’s her female touch, but she definitely earns their respect.”

The teenager is one of many aspiring young female umpires in Cairns, and part of a hard-working umpires group in general.

James, a veteran of three AFL grand finals, had the squad complete fitness training in the off-season and he said Pullinger was among the hardest-working.

“She still comes in and does extra spin classes with me after training. She’s a credit to herself.”