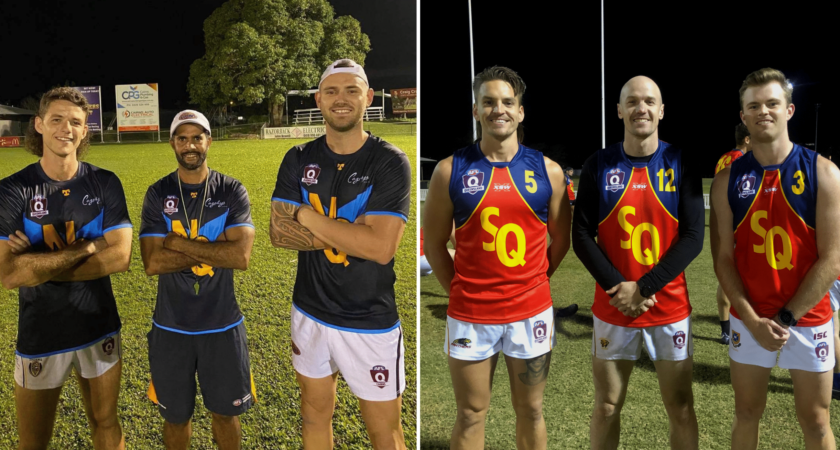 As winter makes it’s self known across Queensland and the South East of the state shivers through a “cold snap”, North Queensland (NQ) Coach Aaron Davey hopes the tropical conditions add the finishing touches to the “strongest NQ side in a long time” when they take on South Queensland (SQ) on Saturday.

Speaking on a sparkling Cazalys Oval, less than 48 hours out from kick off, the former Melbourne Demons player and NQ representative turned debutant coach said the stage was set.

“Hopefully the conditions work in our favour and it’s too hot for the Southerners. For us, it’s actually pretty cold at the moment!,” he said.

The Coach admitting, sunshine and 25 degrees aside, the nerves had already kicked in ahead of Saturday’s clash.

“I am feeling extremely proud but nervous at the same time. But most of all I’m really looking forward to it – it’s always a special thing playing rep footy. I’ve been fortunate the play in the past two and now to be given the opportunity to coach, I’m proud. I’m excited.”

With Cairns playing host to the 7th instalment of the Rep Clash, Davey made mention of his local competition, notin ghow special it was to have all seven of the clubs in the AFL Cairns senior men’s competition represented.

“It’s a great sign for the strength of local footy in Cairns. With every club represented, I think it’s the first time in a long time for that,” he said.

“My plan was to bring in some young players and expose them to rep footy so they build on rep footy to come.”

SQ Coach Danny Craven, who’s inked his name into the NQ v SQ history books with a four game winning streak, admits the Southerners will have their work cut out for them if they’re to go five from five under his guidance.

“If you believe the scribes, this is supposed to be NQ’s best chance and best line up against us in the last five years and from what I am looking at on paper that probably is definitely the case,” he said.

“We will need to play our best footy to compete. It’s a great occasion for all players to represent their region . And if we can come away with the win, that’d be fantastic. But really, I think it’s probably one of the closer games we’ve had over the years.”

Dubbed “Super Coach” by his Northern counterpart, Davey, Craven spoke of the excitement of seeing the next crop of Queensland representative players taking part in the big dance.

” We have 19 brand new ones, and I think they’ve got 18 new ones. Every year across the teams we get different batch of players from diverse parts of Queensland that get an opportunity, which is what it’s all about, ” he said.

“Every time we have this rep game you seriously don’t know what you’re going to get from the opposition and even within your own group, because you got all these new faces representing you. They come from all walks of life and they’re representing as one unit for two hours, for one day.

“It’s not like coaching a grand final team where you know your core group and all that. Rep footy is exciting for that reason, and particularly in our case we are drawing from 45 football teams and five different competitions, so trying to narrow down the talent pool is like finding a needle in a haystack.”

But needles he believes he’s found.

“There is a young fella called Zac Quinn from Mayne who we think has great honours in front of him. And, there is a couple other youngsters; young Jaden Patching on the wing from Redcliffe is doing a good job at club land. Benny Lynch at full forward is an excitement machine when he gets going and were excited for that this weekend.”

With young talent at the ready for both teams, equally both will rely on their experienced players.

“It’s an absolute honour, I’ve played in the SQ team for a few years now and I’ve seen how Benny Merrett did it captaining the team the last three years. To be captain of quality teammates is really special,” said Page.

“It’s an honour and a privilege. I was shocked when Flash gave me the news I was going to be captain. I was grateful just to be a part of the squad, let alone just being in the team. And then I got the news I was captain! I will do my best to represent the region, our clubs and my family well,” he said.

AFL Queensland announced yesterday the new kick off time for the match; 2:15pm (Read the statement). The game will be live streamed on http://cluch.tv

You can also follow along on AFLQ socials for live score updates.