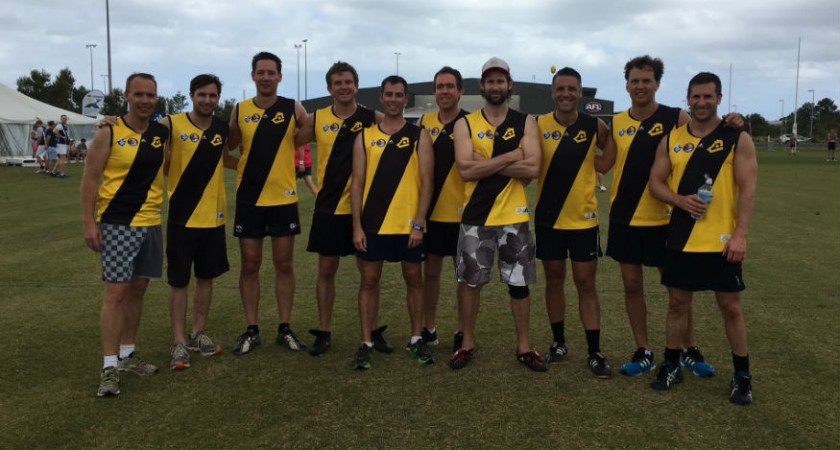 The 2015 Byron Bay Invitational has kicked off in spectacular fashion today.

The Dingos won the race as the first team to arrive and register this year, eager to get out there and get the ball zipping around. You can’t miss them in their yellow get ups.

Official proceedings got underway at 2:00pm, and first up it was the Cobras and the Dingos in the Men’s Division.

The Cobras were unstoppable in the middle, getting the job done by 21-points.

A couple of Queensland representatives are up here this weekend hoping to go one better than their associated clubs did this year.

Both Maroochydore and Coorparoo, who finished runners up in the QFA North and QFA South competitions in 2015, are represented in the Masters Division.

Teams from Tasmania, Victoria, New South Wales and Queensland have all packed their bags and made the trek to enjoy a couple of days full of footy, friends, and entertainment at the Byron Regional Sports and Culture Complex.

The DFC Magpies, up from Tasmania for the weekend are the front-runners early in the Men’s Division, and there is a familiar face running around with them.

Gold Coast SUNS tall Daniel Gorringe has decided to lace up the boots in his time off, and is loving the tournament so far.

“It’s really good fun. It’s really enjoyable, and I’m loving having a kick and having a bit of fun. It’s nice to enjoy things like these in the off-season,” Gorringe said.

“In the off season we don’t get to touch the footy much, so it’s nice to come out here, have a bit of a run around, and keep fit. It’s good to stay sharp and think about the game.”

It has taken some getting used to though.

“The rules are the hardest thing to adjust to, sometimes you want to make contact but you can’t, and you really have to focus hard on keeping the ball off the ground and not turning it over,” he said.

Rounding out the day in the Masters competition was the Southern Comfort team, which had ex Essendon player Mark McVeigh, and AFL Executive member Andrew Dillon apart of their team.

They just get over the line against the Solway Scraggers by five-points.

Tomorrow, the Men’s and Masters competitions continue, as well as the Women’s, Mixed, and Youth Divisions.

The first game gets underway at 9:15am

Fans will also be treated to an all-star game at 4:00pm, captained by Peter “Spida” Everitt and Brisbane Lions defender Daniel Merret

For all today’s results, and tomorrow fixtures, click HERE