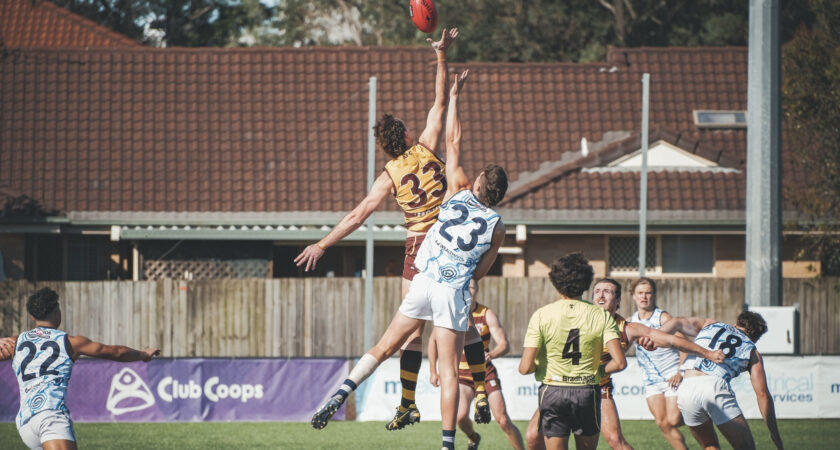 BROADBEACH has consolidated its place on top of the QAFL Senior Men’s competition ladder with an ultra impressive 28-point win over Aspley at Graham Road in Round 10 action on Saturday.

In the major blockbuster match of the weekend, the undefeated reigning premiers led at every change against one of the competition’s genuine contenders to cement its place on top of the ladder on percentage and a game in hand over Redland-Victoria Point.

Both teams headed into the contest filled with high expectation; matching each other quite closely, statistically across seven games this season. Both teams had averaged 50 points more than their opposition across the season; and with Broadbeach entering the game on the back of seven changes and Aspley in full flight after a commanding win over Wilston Grange the previous week, in near-perfect conditions, this match had the makings of an instant classic.

To add to the quality of the game; Alex Whetton (AFL), Sam Whetton (VFL/AFLW) and Jake Edgar (QAFL) officiated the match.

Broadbeach missed forward duo Jordan Moncrieff and Connor Nutting; both absent through a knee injury and concusson respectively but Alex Moloney and Riley Bowman were handy ins. Cal Parker was an emergency for Jackson Fisher.

FIRST QUARTER
Fresh off his six-goal best on ground effort against Sherwood, Sam Jasper ignited the Graham Road crowd with the opening goal in the first minute of the game for Broadbeach, thanks to the brilliance of Michael Selsby in the middle. Daniel Henderson kicked truly for the Hornets just two minutes later as both teams dished out some telling blows early.

The first 10-minutes were epic but the game started to open up with three goals in five-minutes for Broadbeach. The highlight of that run came when Brad Lowe laid a beautiful tackle on Aspley’s James Nelis that enabled Brad Lynch to scoop up the ball, take several bounces, run to 20 and kick truly to open up an 18-point lead.

Aspley’s entries into the forward 50 at times lacked direction due to the tremendous pressure from the Broadbeach midfield and half-back lines; physical and perceived pressure; and resulting in numerous turn-overs.

When Cal Parker slotted through a goal on quarter-time, the Cats led the game by 32-points.

SECOND QUARTER
Josh Searl continued the nightmare for the Hornets when he kicked a rare goal for the Cats. After being awarded a free kick and 50-metre penalty, the reigning premiership captain kicked the Cats to a 38-point lead 90-seconds into the term.

Things changed when Dan Joseph scooped the ball off the wing for the Hornets, spearing the kick up to centre half forward that ultimately led to Connor Stackleberg winning a free kick and breaking a 38-minute goal-less drought. Things turned in the favour of the home side as it took its opportunity to dominate the contest. Poor kicking prevented the gap being closed much quicker.

Nick Dodge had a golden opportunity for Aspley late in the quarter when he had plenty of space in the forward pocket, before electing to kick around his body as the shot cannoned into the post. He intercepted the kick in 35-metres out an didn’t make the same mistake twice, with a classic 7-point-play to cut the margin back to 16-points.

THIRD QUARTER
In a game that continued to fluctuate between strong momentum swings; Broadbeach took the time to shine in the third quarter. With most of the scoring executed to the social rooms end of the ground (despite little to no breeze), the visitors ended a 35-minute goal-less drought in style when Alex Moloney cleverly tapped the ball between his legs near the goal square for Nick Burton to swoop and kick the first of two third-quarter goals.

Aspley fell away at half-forward and at times and couldn’t make the most of its chances up forward. Connor Stackleberg kick the entirety of the Hornets’ score for the quarter with 1.3 as the Cats continued to kick away, leading by 31-points heading into the final change.

FINAL QUARTER
Aspley kick started the final quarter in style with a pair of goals through McCarthy and Batchelor inside the first 3.5-minutes.

The first of two crucial moments of the quarter occurred at the next centre bounce. With the margin cut to 19-points; Aspley was awarded a free kick in the middle of the ground due to an infringement in the Cats’ forward line. In a bizarre moment, Aspley turned the ball over so easily in a matter of a moment; Broadbeach gathered the ball and Brad Lowe marked inside 50 while the vast majority of players were setting up for the free kick to the Hornets. Lowe kicked truly.

Nick Dodge kicked a goal several minutes later to cut the margin back to 19-points. Dodge loomed as being the hero, but at the 11-minute mark, a slight brain fade would cost the Hornets dearly. Dodge gave away the free kick at half-forward and Liam Nelson would be the beneficiary. Dodge would give away two 50-metre penalties that would take Nelson from halfback to inside the forward 50. He kicked truly to extend the gap to 25-points.

Over the course of the next 20-minutes, Broadbeach kept its opponents at arm’s reach and saluted to a strong win.

For the Cats, it was a clinical team effort with Michael Selsby the outstanding midfielder of the day; and a special shout-out to Cal Parker who played an outstanding game while coming in for Jackson Fisher. For the Hornets, Nelis was rock-solid at halfback and Will Wolbers was servicable in the ruck.