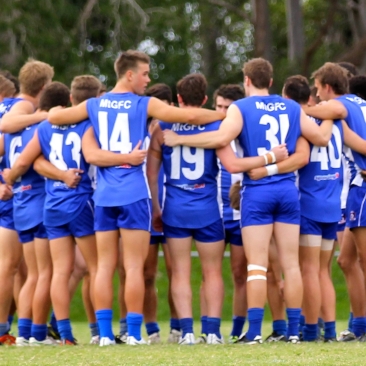 Adam Boon proved his quality for the Vultures in Rd 7, landing him the Syd Guildford Trophy nomination.

The Redland-listed defender played his second straight match for Mt Gravatt, in their win over Wilston Grange, and had the ball on a string, with an estimated 40 touches.

A Redland junior, Boon has played four matches for the Vultures this season, the opening two and the most recent two, among the blue and white’s best in all.

While his performance puts him on the cusp of a NEAFL recall, there’s no doubt Mt Gravatt coach, Brad Pollock, would be happy to have Boon in the side every week.

Pollock said Boon’s leadership and skill helped lift the side on the weekend.

“He always shows a lot of leadership and he directs a lot of traffic in the back line,” he said.

Pollock said Boon gave the team quality off the field too, offering encouragement to his teammates.

“He always shows a lot of leadership and he directs a lot of traffic in the back line.

“He gets around all the players and socialises with the boys very well.”

While he has been shuffled around a bit this season, Pollock said he had confidence that Boon could re-establish himself in the NEAFL, if given the opportunity.

“I think there’s no reason he can’t make a name for himself in the NEAFL.”

“These guys need a chance to establish a spot and prove themselves.”

Boon’s performances in the QAFL this season also gleaned him a spot in the league’s representative squad, to play the VAFA on June 8 at Moreton Bay regional Sports Complex – AFL Precinct.