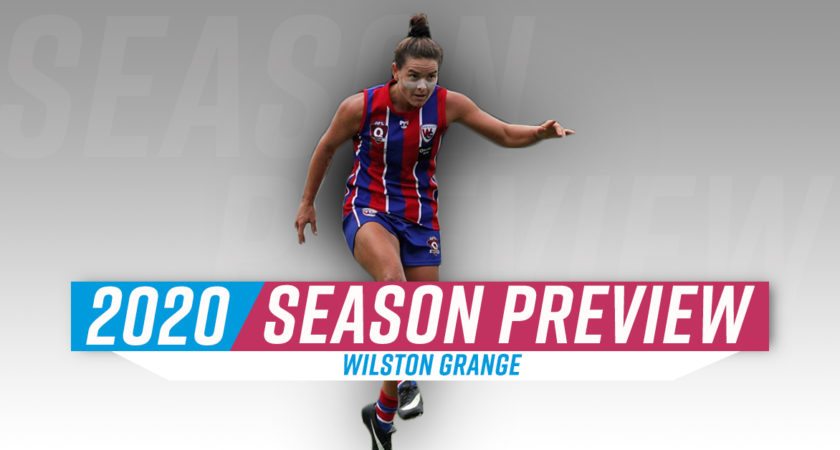 Wilston Grange underwent a significant transformation in 2019 after dominating the QAFLW the year previous. A shift in culture saw the side almost restart on the fly and while that facet of the team improved, they struggled to hit the scoreboard throughout the season. Under Rod Podbury, the Gorillas won just three games and became the second straight reigning premier to miss the finals in the following season. The Gorillas had two representatives in the Bond University QAFLW Team of the Year in hard-running midfield pair Amy Kelly and Cathy Svarc, who went on to be drafted by the Lions, named in the starting 18.

The Gorillas’ renaissance has kicked into another gear over the summer as the club aims for a return to finals action in 2020. Former Footscray and Adelaide forward Barry Standfield has been unveiled as their new coach while a host of new big-name players including Sophie Conway, Rheanne Lugg and Bri McFarlane have joined the club. With the Brisbane Lions playing their home AFLW games out of Hickey Park, the Gorillas have become a likely destination for players with the appeal of playing AFLW-QAFLW curtain-raisers in the first portion of the season a genuine draw card.

The Gorillas have been savvy in their recruitment over the summer and may have unearthed one of the finds of the QAFLW season in O’Connor. The former Hermit Park midfielder joins Wilston Grange in superb form after being named best on ground in the Tigers’ premiership win in the AFL Townsville competition last season.

While it would be easy to name any of the Gorillas’ new AFLW-listed signings, we have gone with dynamic forward Bri McFarlane. The former Bluebird has been hindered by injuries in her three years in the sport but has shown her brilliance in glimpses with both her former QAFLW side and with the Lions across the AFLW practice games and the QW Winter Series. A strong marking forward, McFarlane will undoubtedly help transform Wilston Grange’s forward line this season.

Another recruit from Queensland’s north, Dupuy is an accomplished dual-sport athlete having starred for both Cairns Saints in the AFL Cairns competition and as captain of the Northern Rays in the Sapphire Series netball competition. She played six games for the Saints last season and even made an appearance for Gold Coast in the QW Winter Series and one game for Coolangatta Tweed in the QAFLW.

The new recruits all hit the ground running. It’s no secret that Wilston Grange have been active in the recruitment process but with so many names joining the club, it could take some time to establish that synergy on the field. If the new group can gel effectively and quickly under the experience of Standfield, the results should improve. p

A new midfield leader doesn’t emerge. Over the past two seasons, Wilston Grange’s engine room has just about been the envy of the competition however a lot has changed since their last game in the QAFLW. As we have seen in previous years, AFLW players don’t front up for a full QAFLW season and normally take a few weeks to rest and recover from their AFLW campaigns. With Cathy Svarc now with the Lions, the onus falls on other Gorillas to ensure their midfield can still match it.

Competition for positions heats up amongst the Lions

By AFLQ Media The competition amongst the AFLW Lions squad is running hot, with Coach Craig Starcevich admitting he’s finding it hard to narrow down his best... [more]

Lions recruits Joe Daniher and Nakia Cockatoo have been handed two of Brisbane’s most famous numbers for the 2021 season. Joe Daniher will wear the most... [more]