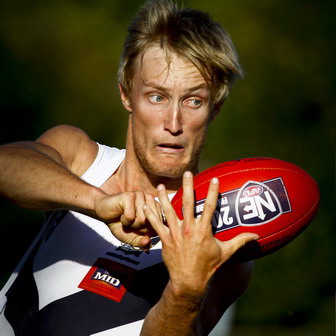 Southport coach Norm Dare loves a bet. He always has. Yesterday he wagered his club’s NEAFL finals campaign on a handful of suspect players and collected via a preliminary final berth. Just.

The Sharks posted a three-point major semi-final win over a desperately unlucky Redland Bombers at Fankhauser Reserve to qualify for next Saturday’s grand final qualifier against the NT Thunder at Broadbeach’s H&A Oval.

Haydn Kiel kicked a 40m goal after the siren to get Southport home 10-9 (69) to 9-12 (66) after Redland had led the pressure-packed low-scoring strugglefest by as many as 11 points in the final term and nine points with nine minutes to play.

It was the second-lowest winning score in the Northern Conference this season behind Labrador’s 54-point winning effort against the Gold Coast Suns in Round 6, and in Dare’s words the Sharks “won ugly” and were lucky to get the points.

But it could have been an altogether different story.

At training on Friday night the Sharks had no less than four players facing fitness tests. There was Brett Davis, who hadn’t played since Round 17, and Simon Seddon, who had been out of action since Round 18, plus two others Dare chose not to identify.

The all-or-nothing situation determined that the master coach play each of the four suspect players. And each made a worthwhile contribution to a winning team effort.

“Yes, it was a bit of a gamble but it was a gamble we had to take if we were going to go any further,” Dare admitted.

“We couldn’t wait any longer. And if we didn’t take the gamble I don’t reckon we would have got through.”

So, having lost Josh Milani to an ankle injury, Dare included Davis, Seddon and Sam Whish-Wilson, who missed the qualifying final due to concussion, and omitted Stephan Thynne and Arnold Knight.

Dare conceded Davis, Seddon and even Whish-Wilson were underdone because they’d missed a lot of football but would be better for the run, and would help the Sharks in the remaining finals.

It was a day when things fell Southport’s way, right down to the final siren.

If it had blown nine seconds earlier Redland would have won.

But with eight seconds on the clock the ever-dangerous Kiel found the strength to grab a telling mark at centre half forward. As he walked back to his mark it sounded. Their finals campaign came down to one kick.

Asked to nominate who in his side he would have chosen to have the deciding kick Dare hesitated for an extended period before eventually answering. “Probably David James … he can spray them a bit on the run but he’s pretty good when it comes to a set shot,” he said

But Dare said Kiel wasn’t a bad choice. “He’s a pretty relaxed sort of guy so I don’t think the pressure was ever going to get to him.

“I always watch the bloke with the ball, and as soon as it left his boot I knew he’d kicked it. His arms went up. It was a beauty.”

Indeed, it was a beauty. And not just Kiel’s match-winner. It was a thrilling contest from the first bounce.

Southport led at every change. They held Redland goalless in the first term to take a 12-point edge to quarter-time and after each team kicked two goals in each of the second and third quarters the Sharks were 10 points up at halftime and six points up at three-quarter-time.

But after Redland spearhead Scott Clouston landed a 55m boomer to put his side in front midway through the fourth quarter it looked as if the momentum was swinging to the visitors.

And it could have gone their way. They had their chances and got nine, then 10 and then 11 points up. But when the game was on the line they were unable to capitalise. When it mattered Southport handled the occasion better.

Dare said he was pretty comfortable at three-quarter time as the Sharks prepared to come home with a handy wind, although he conceded neither side had taken much use of the breeze.

“And then we did our best to lose it with some stupid decisions and some bad turnovers. In the end we were lucky to get an extra chance,” he said.

The ball fluctuated from end to end in the closing stages as first one side then the other missed chances.

Then Southport midfielder Ed Mallan marked deep in the pocket. After his first effort to play on and square the ball to a teammate in a better position was called back he calmly played on a second time and slotted it.

A few minutes later it all came down to Kiel, the 24-year-old local boy who had returned home this year after AFL rookie stints with Brisbane and Hawthorn and a VFL stint last year with Box Hill, where he played predominantly in the back pocket.

It hadn’t been a brilliant reunion. Kiel had arrived home in a “very disappointing condition” as Dare put it, and “definitely started behind the eight ball”.

But he’s worked hard to get himself into top shape, according to his coach, even riding his bicycle to training and taking a job as a personal trainer.

After being named in his side’s best players on the NEAFL website just once in the first 16 games he’s bobbed up twice in the last four, including the semi-final on Sunday.

His 19th goal in his 20th game of the season will long be remembered by Sharks stalwarts, who when the final siren went were looking at a straight-sets exit from the finals in their return to the post-season after missing out for the first time in club history last season.

Mallan, the 20-year-old one-time schoolboy rugby union ace at Churchie, was best afield with a career-best three goals and a mountain of hard-at-it work in the midfield.

“He was terrific … he goes at it so hard and he just keeps getting it,” said Dare.

Josh Baxter was a similar standout, kicking four of his side’s 10 goals, while Kiel, Fraser Pope, Tom Daniel and David James were also ranked among the Sharks’ best.

Dare said he was also pleased with an improved contribution from Ben Merrett, but he conceded the Sharks would need a more consistent contribution across the board to beat the Thunder next week.

“Last week we had more good players and lost (to the Lions in the qualifying final). We’ve definitely got a lot of players who can improve and that’s what we’re going to need,” he said.

“We fumbled a lot early and turned it over a fair bit. I’m not sure if it was because we were flat after last week or what, but they (Redland) were very good.

“They had a really good crack at it and I reckon they’d have every reason to be pretty disappointed.

“There was a lot of pressure all day and it never really opened up. I reckon they used the ball better than us around the ground and we used it a little better inside 50.”

Dare suggested Redland key forwards Clouston and Josh Pullman, each with more than 50 goals for the season, had dominated much of the game via their aerial work without putting it on the scoreboard.

“They took a lot of marks between them but they didn’t punish us on the scoreboard as they might have,” he said.

Clouston was closely marked by State teammate Wayde Mills in an epic battle between two of the competition’s best, but according to onlookers still had “about 15 marks”.

Dare remained a big Clouston fan, and quickly answered ‘yes – definitely’ when asked if he would draft the 25-year-old former Lions rookie this year.

“He’s ready to play at the next level. When you see blokes like ‘Pods’ (Geelong’s James Podsiadly) get a chance you think Clouston is definitely worth a crack because he is much more mobile than ‘Pods’,” he said.

Dare revealed Southport had spoken to NEAFL officials about playing the preliminary final in Brisbane to give the players the best possible surface on which to ply their craft, but had accepted that a Southport- NT final in Brisbane wouldn’t draw the same crowd it will draw on the Gold Coast.

He had no qualms playing the match at a neutral venue at Broadbeach. “If there’s going to be a homeground advantage it has to be in Darwin because they (NT) finished top of the ladder. I’ve got no problems with that,” he said.

Redland, chasing a club record 13th win for the season, went in with one change to the side that had beaten the Gold Coast Suns in the elimination final a week earlier. Matt Sondergeld returned from injury to displace Tyler Jones.

But they chose a highly inopportune occasion to post their lowest score of the year. And not by just a few points. They were 41 points down on their season scoring average.

It didn’t help that half forward Allen Bielski suffered a nasty hamstring injury in the first quarter for the second time this year at Fankhauser Reserve.

To play a man short for most of the day was a significant disadvantage.

Still, coach Greg Seton-Lonsdale was philosophical. “The better side lost today, but that’s footy,” he said.

Seton-Lonsdale said he remained “really proud” of his troops, who left nothing in the tank.

“I said to them after the game that they should feel gutted because it was one that they let slip away. I hope they remember how they felt when the siren went because it should be a little extra motivation for next year, and it might help keep the group together,” he said.

“We just turned it over a bit too much, and we didn’t always play to plan. We wanted to get the ball on the outside so we could run on them, but we didn’t really get that done too well, and we wasted a few opportunities in front of goal.

“Having said that we were nine points up with nine minutes to play. Maybe we should have slowed the game down and played a bit more defensively. It’s easy in hindsight … we just didn’t get it done.”

Tom Salter, who waged an enthralling battle with James on one wing, was judged the Bombers’ best, while Matt Thomson worked tirelessly in the midfield and Jason Paxman was effective in the ruck against on Southport pair Dan Weymouth and Fraser Thurlow.

Damien Steven also did a lot of good work in the midfield with Sondergeld and captain Phil Carse, while Daniel Dzufer did a fine job on Southport spearhead Cleve Hughes, holding him to just one goal, and Adam Oxley battled hard against the powerful Baxter after he was swung onto him early.

Youngster Luke Rogerson also continued his fine start to what shapes as a most promising senior career, and Clouston always looked dangerous.

As much as the Bombers were devastated to lose such a winnable game, Seton-Lonsdale insisted they should be well-pleased with their 2012 efforts.

“We can’t lose track of the fact that we’ve come a long way … nobody would have given two bob for our finals chances at the start of the season and here we are one kick away from a preliminary final,” he said.