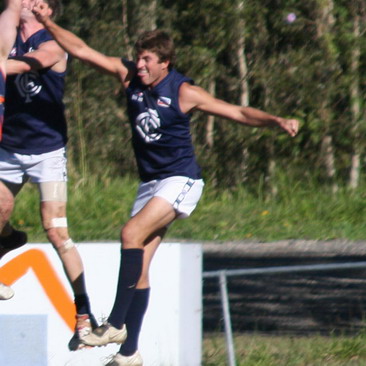 THE future for Coolangatta looks as bright as their new floodlights if a big win over Burleigh in their Gold Coast derby on Friday night is any indication.

Christening their new $400,000 lighting system in style, the Blues destroyed the Bombers by 20.15 (135) to 8.10 (48) at Len Peak Oval.
According to coach Neil Mackay, things are starting to come together for a relatively young side that has been just off the pace most of the season but carrying signs of better times to come – if the club can hold on to several of their promising performers.
“We’re starting to put everything into practice and now we have the challenge ahead against Noosa at home, then the Western Magpies away,” said Mackay.
“It’s the end of the season, we’re coming into form and now we can have a look at where we’re at (against two finalists).”
Coolangatta dominated throughout after opening with 4.4 to 1.2 in the first quarter. They kept Burleigh goal-less in the second term, added 8.2 in the third, then again kept the Bombers goal-less in the final quarter.
That was the most disappointing aspect for Burleigh, perhaps the season’s most disappointing team, a team that lost the 2010 preliminary final.
Coach Zane Doubleday described the Bombers as ‘pretty average’ and typical of a team looking for an end to what has been a frustrating campaign.
“:I think with injuries, and the way things have panned out for us this year – and with the current group we’ve got – collectively we’re not up to it,”
Doubleday said tough Marcus Powell was ‘super, the lone hand in the middle’,, while Tim McKay down back tried hard. And youngster Sam Brown on a wing did his bit.
“But we have three or four guys doing all the work – that’s been our problem all season,” said Doubleday, who can see brighter times ahead.
“We have  half a dozen players aged 16 to 19 who look like hanging around with us next year. That’s a positive – to see the development of juniors.”
In contrast to Burleigh, Coolangatta had winners all over the ground, none better than centre half-back Blake Ebsworth who doused the input of dangerous Bomber forward Luke Rowe.
Papua New Guinean Ali Pinda, playing the central forward roles, kicked six goals, while felloe PNG player Paul Philip stood out with his pace and clean hands.
Young on-baller Jamie Beer-Carey also impressed coach Mackay.