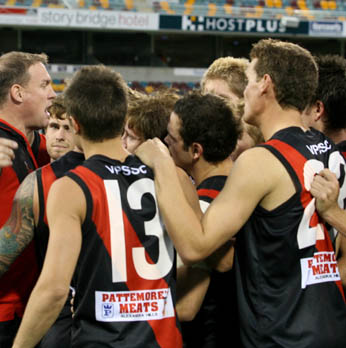 The new ‘Cinderella’ team of the QAFL clashes with last year’s version in a season-defining game for the Redland Bombers at Victoria Point tomorrow.

The new ‘Cinderella’ team of the QAFL clashes with last year’s version in a season-defining game for the Redland Bombers at Victoria Point on Saturday.

Redland take on the new-look Labrador, featuring former AFL aces Tim Notting and Peter ‘Spida’ Everitt, in a game they simply must win to keep their finals hopes alive.

The Bombers were the feel-good story of the 2009 season by soaring into the top three after years in the cellar, even if they exited the finals with back-to-back losses.

Life has been much more difficult this season, with four wins from 10 matches, although the Bombers have been in a winning position on nine of those occasions.

They were overrun by second bottom side Aspley last Saturday after controlling the game for the better part of three quarters and need to beat a top side like Labrador to get their season back on track.

“When we’ve got the ball we’re going to be under pressure so we’re going to have to keep our composure,” said Bombers coach Matty Francis after watching Labrador upset Morningside last Sunday.

“If we can use the ball well, we’ll be alright.”

Labrador have played in just three finals series in 13 years in the QAFL and their second placing after 10 rounds is the highest they have ever been at this stage of the season.

Notting has contributed 37 games and been a genuine matchwinner up forward, while Everitt’s palming of the ball in the ruck has been textbook and he took a big mark last week that would have done Wayne Carey and Jonathan Brown proud.

Notting has played a key role in Labrador’s rapid climb into second place on the QAFL premiership table and Francis was full of praise for the former Lion’s efforts and the nous of his Tigers coaching staff.

“It is an interesting position to be playing him, full-forward – I take my hat off to their coaching staff because he played all his football as a midfielder, wingman or half-forward,” Francis said.

“He has been doing a magnificent job. He has shown dedication and commitment to get a kick, which isn’t always easy when you come back out of the AFL system.”

While Notting’s 37 goals have him third on the QAFL goalkicking list, the Bombers have had 20-goal contributions from Daniel Dzufer and Adam Mueller, and Francis is confident in his own side’s firepower.

“We had 10 marks inside 50 in the first quarter and 12 in the third – you generally win the game when you have stats like that,” Francis said of last week’s upset 17-point loss at Aspley.

“We are capable of kicking a winning score against anybody.”

Indeed, Redland have been in with a chance of winning in nine of their 10 games, despite winning just four, and have not been beaten badly by anyone.

“It’s not that we’re a bad team, it’s just the competition is demanding that we take our football to a slightly higher level,” Francis said. “This game is perfectly suited to us – we’ve probably lost a bit of respect and a gutsy, hard fought win at home is just what we need.”

Redland running players Josh Norman, Blake Passfield and Justin Myers have not stopped trying for the Bombers in recent weeks and they will have to take control if their side is to win.

Francis is confident a big local crowd and the comforts of home will help his side deliver a quality performance this time around.

“Playing at home is an advantage – we like our own park,” he said.

MAHER DEBUT FOR THUNDER
FROM AFRICA TO AFL