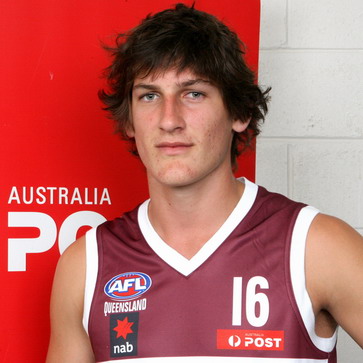 The Australia Post Queensland U18 Scorpions suffered a no-nonsense reality check when hammered by the NSW/ACT Rams by 74 points at Coorparoo today.

And it could have been worse today had an ultra-classy NSW/ACT side kicked more accurately.

A total of 36 scoring shots to 12 was a fair indication of the difference between the sides, as the Queenslanders were let down badly by fundamental skill errors.

They fumbled badly and kicked the ball poorly, especially into their forward line, in stark contrast to a NSW side which moved the ball with much greater precision.

Making things worse for the Scorpions was a collarbone injury just before halftime which put captain Joel Wilkinson out of the match.

Wilkinson is in doubt for next week’s two-match trip to Melbourne, where the Queenslanders will play Victoria Country at Visy Park next Saturday, and Northern Territory at Etihad Stadium on Wednesday week, 30 June.

Sam Michael (pcitured) was a clear standout in a disappointing Scorpions outfit. He started in the ruck and played a kick behind the play early in a bid to quell the attacking prowess of the Rams before he was pushed forward by coach David Ashkar in search of greater scoring punch.

Rover Chris Wittkopp worked hard and won a lot of ball to the Scorpions’ second best, ahead of tall utility Michael Hutchinson, who started on the wing before being switched to centre half back to quell dominant NSW key forward Josh Bruce.

Nathan Reid, who started forward before being pushed into defence, and Brad Slater completed the best player list of the Queensland coaching staff, while Liam Ruttledge kicked three of the Scorpions five goals.

Wilkinson had been among his side’s best until injured when hit by a crunching tackle as he ran with the ball through the middle of the ground in a bid to inspire his side.

Just to run salt into the wounds, they kicked 5-3 to in final stanza and held the Maroons goalless.

The 25-man Queensland squad to travel to Melbourne will be posted on the AFLQ website about 5pm Sunday.