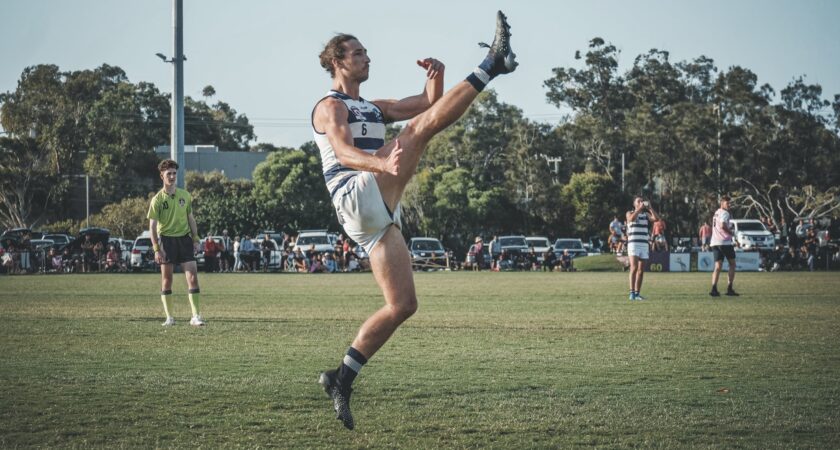 In just his second QAFL season, Jordon Moncrieff has cemented his place in the AFL Queensland history books winning the prestigious 76th J. A Grogan Medal and dominating the 2021 state league awards night.

A season which saw the former Mt Eliza and Casey product kick 55 goals in 12 games for the Cats, Moncrieff was also awarded the Ray Hughson Medal for QAFL Leading Goal Kicker. His biggest tally came against Mt Gravatt where he kicked 10, he also had a nine-goal haul against Wilston Grange. Add to that, three other games where he kicked six goals during the year.

Moncrieff polled 19 votes in total, securing eight in 12 games. He was also awarded Best on Ground in four games.

Moncrieff’s third award of the night came in the naming as full forward in the 2021 QAFL Team of the Year.

Bond University’s Shannon Danckert was named the QAFLW Best and Fairest and in doing so, took home the inaugural Emma Zielke Medal after a stellar third season with the Bullsharks.

Danckert kicked five goals this year and polled votes in eight of her 13 games for a total of 16 votes. She was voted best on ground on three occasions, and as Bullsharks Skipper – guided her team all the way to the Bond University QAFLW Grand Final, falling agonisingly close to claiming the club’s maiden premiership.

AFL Queensland announced earlier this year the naming of the Bond University QAFLW Best and Fairest Award as the Emma Zielke Medal.

The Bill Clerke Medal for the QAFL Reserves Best and Fairest went to Teejay Halkias from Morningside who polled 13 votes, while in the QAFL Colts Maroochydore’s Thomas Cuthbert took out the Clem Ryan and Keith Wallis Medal with 19 votes.

Louise Tyson from the University of Queensland was named the 2021 Bond University QAFLW Development League Best and Fairest for her outstanding season.

Jonathan Croad from Palm Beach Currumbin took home the Syd Guildford Trophy as the QAFL Most Valued Player, as voted by the QAFL coaches.  Croad polled nine times out of his 13 games and twice received a perfect 10 out of 10.

The most valued player in the Bond University QAFLW went to star all-rounder Chloe Gregory from Maroochydore. Gregory featured in all 14 of the Roo’s home and away games this season, as well as their two finals games, booting six majors along the way. Gregory received votes from five of the eight QAFLW clubs in the post season review.

A season which saw him kick 23 goals in 13 games for Labrador, Cooper Anderson was named QAFL Rising Star. The former Beenleigh junior had his best outing in Round 15 against rivals Surfers Paradise where he kicked four goals.

There was plenty of competition in the theatrical award categories, with Coolangatta Tweed duo Kitara Farrar and Brittany Perry taking home QAFLW Goal and Mark of the Year.

In the QAFL, Surfers Paradise Jack Prestegar was awarded QAFL Goal of the Year for his sensational near length of the field play which ended in an unbelievable goal, while Redland-Victoria Point Sharks’ Jarrod Huddy took out QAFL Mark of the Year.

To watch a reply of the virtual awards night, head to YouTube.com/OfficialAFLQ

QAFL Team of the Year