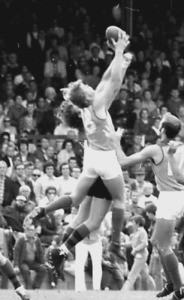 A Tasmanian-born fullback who represented the Apple Isle at schoolboy level and moved north as a teenager. Commenced his Queensland career at Ipswich, where he started as a full forward. Won the George Hall Medal (Reserve Grade) in 1967 while playing in Ipswich’s senior team that played reserve grade only. Was lured to Kedron where he was a triple B&F winner and a State team fixture through the 1970s.

Was a member of the champion Queensland teams of 1974-75 which swept all before them, including an historic win over Tasmania at the Gabba in ’75, he had the honour of captaining Queensland in 1977. Finished his career with Sandringham in the VFA.

His son Lewis is a premiership player with the Sydney Swans.