Back to the beginning for Zorko 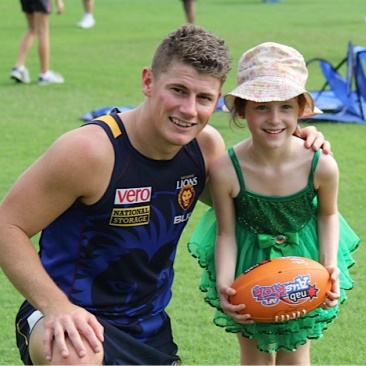 It’s Sunday morning at Coorparoo football club and amongst hundreds of regular Auskickers and their parents, there’s one adult enjoying things more than most.

In the midst of a four-day break from the Brisbane Lions, Dayne Zorko is at home among the lively throng, where he is being unveiled as the new NAB AFL Auskick Queensland Ambassador.

As he grabs a pad, jumps into Auskick drills and banters with kids, it’s not hard to believe he was the kind of child who dragged his parents out of bed at six o’clock on Saturday mornings to head out his local footy club.

In many ways, Zorko still is that child, armed with an unadulterated passion for football at all levels.

He’s heading into his third season at the Lions, but the small forward/midfielder still has the reputation of being one of the most enthusiastic in the den, treating every day like it’s his first in the big league.

That enthusiasm shines through in every conversation with Zorko, whether you’re talking about footy, his family, or his guilty television pleasure, My Kitchen Rules.

His obsession for footy hasn’t waned since his first day down at Surfers Paradise as a three year-old, when his older brother, Beau, joined the U8 side at the Demons.

That first day started a lifelong love affair with sport, with Zorko admitting he rarely spent a moment without a footy in his hand as a kid, either  at the club or his family home, the site of some thrilling Zorko footy face-offs.

The second youngest of four kids, Dayne would team up with older sister, Sasha, against Beau and their youngest sister, Emi, for sibling bragging rights, using anything they could get their hands on as makeshift footballs.

Five years Beau’s junior, the littler Zorko would take every opportunity to celebrate a rare victory over big brother, and was innovative in the face of defeat.

“There was one time I was getting beaten by a lot so I threw a remote at him,” he says.

“It was just there and he might have tackled me the wrong way and being five years younger, I wasn’t too happy about it, so the remote collected him.”

Their friendly rivalry is what drove Dayne into football, initially acting as the mascot for the U8s and being involved in any way he could until he was old enough to play in the side.

“I just grew up loving him and adoring him,” he says.

“I always wanted to be better than him and that rivalry probably still goes on today with everything we do.”

As they grew up, the two would have regular debriefs on Dayne’s matches, the first sign of where the two would wind up in the next decade, Dayne as a player and Beau now in his third year as senior coach at Surfers Paradise.

A veteran of more than 250 games with the Surfers Paradise juniors, Zorko still counts Auskick friends in his circle today, including Demons senior player, Chris Mitchell.

It’s those kinds of relationships that reveal the loyalty Zorko values, to his junior club, to his friends and to his family, never missing a chance to thank those who supported him from day one.

And there’s no chance of his ego growing too far if he continues to stay in touch with his grass roots, by his own admission.

“I went back to Surfers last year to deliver some NAB footies to the kids and no one had a clue who I was, which was great.

“They all know my brother but they don’t have a clue who I am.”

It’s been more than 20 years since Dayne Zorko first entered the footy world, but not much has changed for him and he wouldn’t hesitate to recommend the same path for other kids.

“I want to help give back and let kids coming through the ranks now experience the same thing I have, if not better.”