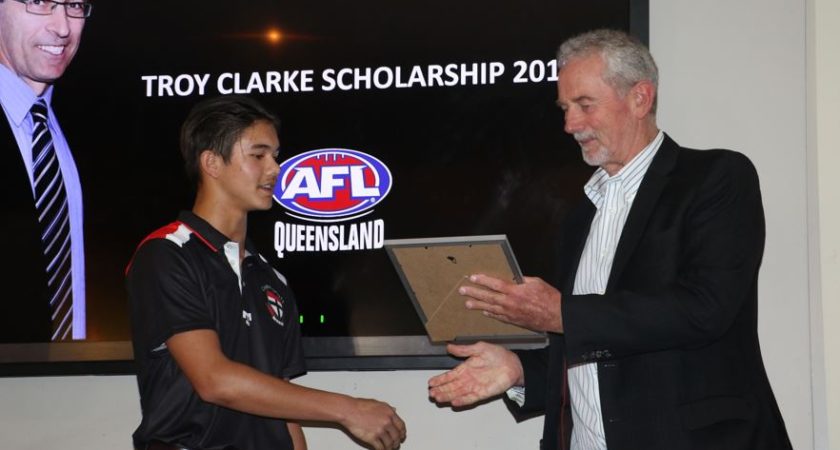 Harris was announced the winner at a function last Friday at the Pineapple Hotel alongside family, members of the Clarke family, AFL Queensland staff and past winners.

Among those in attendance was Australian Football Hall of Fame member, Robert Walls, who recounted a number of stories from his time coaching Clarke at the Brisbane Bears.

Clarke was recruited to the Bears ahead of the 1991 season; the same year in which Walls took over as coach of the team.

Clarke played 68 games in total for the Bears under Walls until a knee injury cut short his career in 1996.

The Troy Clarke Scholarship is designed to support a young person from Regional Queensland each year, the scholarship recognises those who display the dedication, passion and respect that Clarke demonstrated throughout his life.

A Cairns Saints junior, Harris is the first recipient from Clarke’s home town of Cairns to receive the honour.

The talented junior represented Queensland’s All Nations team due to his Thai background, earning MVP for the carnival, player of all states award and Queensland’s best player.

Following his performances, he was then selected in the World Team.

“Austin is a worthy recipient of our Troy Clarke Scholarship. Not only is he a rising star of our game, but truly embodies the values that Troy lived by,” Warren told aflq.com.au.

“We look forward to playing a part in Austin’s development as a footballer.”