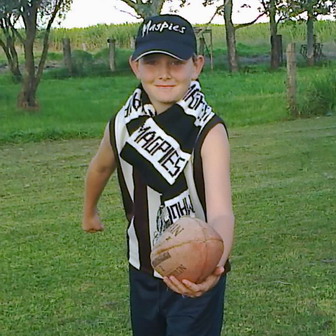 Michael Lock certainly loves the NAB AFL Auskick program. So much so that this year Michael registered for the Woodburn Auskick Centre, in the Northern Rivers Region of New South Wales for the fifth year running.

Always seen proudly wearer his Collingwood jumper, the year-6 Woodburn Public School student’s favourite Auskick activities are goal-kicking games such as footy baseball and shots from the boundary line. He also can’t wait until week 3 when the matchplay begins.

When asked for an Auskick career highlight Michael recalls the Parents Vs Kids game from the final week of this year’s program where he lined up against Mr Fletcher, an Auskick parent and Michael’s teacher.

Michael admits that Mr Fletcher was well on top of him for the first 2 quarters of the game, understandable given the teacher’s height and weight advantage! But Michael didn’t give up and when it was time for his zone to go forward he sensed he was a chance to get off the leash.

Sure enough, with the kids getting on top in the midfield and ball being pumped regularly inside the forward 50 – often along the ground – Michael got the better of his older opponent who had clearly run out of legs as the game wore on.

Michael kicked 3 for the quarter, one just before the siren to give the kids’ team a memorable win against an enthusiastic parents outfit.

Michael hopes to continue his football career with the Ballina bombers next year and has already played some weekend club football.