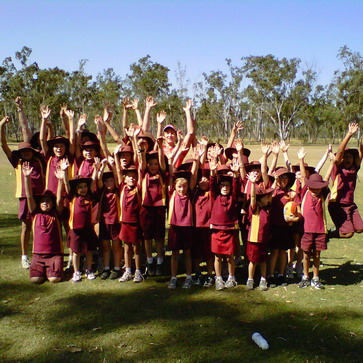 The hugely popular nab Auskick program has broken into previously unchartered territories in the Mackay region this term.

According to local reports, AFL Mackay has been busy hosting AFL clinics in the Western and Central Highlands regions.

Participation numbers, described as promising in areas such as Dysart, Middlemount, Glenden, Bowen and Moranbah in recent years, have jumped to another level.

According to Dion Obst, AFL Mackay Development Officer, one of the new Auskick centres at Coppabella State School (pictured) has been a success story in itself.

The small, mining community located just over two hours west of Mackay, has taken a keen interest in AFL.

The entire school of approximately 40 students have participated in Auskick sessions on a weekly basis throughout the term.

Obst says all staff are most impressed by the way the students conduct themselves, rating them one of the best behaved and most enthusiastic schools in the region.

The students and teachers down the books for the afternoon and are always raring to kick a few goals against the teachers and coaches, he said.

Each week a nominated “Auskicker of the Week” receives a prize as recognition for their efforts.

Obst said AFL was the first sport to run a structured and ongoing sporting program for the children at Coppabella, with the primary purpose of encouraging physical activity in all regions state-wide.

AFL Mackay Juniors invite all young aspiring AFL players involved in the Auskick Program to participate in the round-robin style carnival from 11am-2pm.

It will feature an AFL Clinic, with the highlight of the day being the ‘Parents vs Kids’ match.

All players and parents are welcome to stay and watch the Moranbah Bulldogs senior side take on the North Mackay Saints.