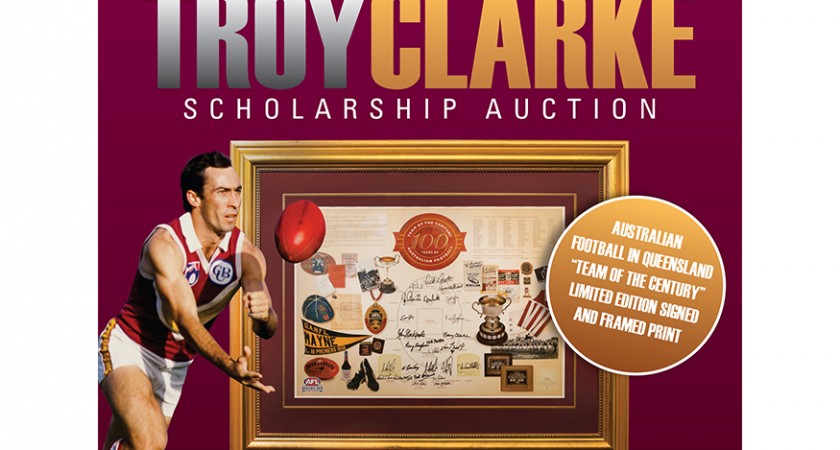 To support the Troy Clarke Scholarship, AFL Queensland – with the assistance of the Brisbane Lions – is auctioning off a very special piece of Queensland Football Memorabilia

In June 2003, 100 years after the first game of the 20th Century was played at the Botanical Gardens in Brisbane, the best of the best were chosen from Queensland’s long and varied football history.

This limited edition print is stamped No. 1 of 250 and is the only copy signed by all living members of the Team of the Century. The Team of the Century includes the likes of Marcus Ashcroft, Scott McIvor, Jason Dunstall, Michael Voss, Jason Akermanis, and Mal Michael amongst other local QAFL legends. The print is exquisitely framed and also depicts a range of important artefacts from across the century.

This memorabilia piece, along with two tickets to the 2015 Toyota AFL Grand Final, have been generously donated by the Burgess family to support the Troy Clarke Scholarship.

ABOUT THE TROY CLARKE SCHOLARSHIP

Troy Clarke’s life was all too short. But in 44 years he left an indelible mark on Queensland football.

From his early days as a junior player in Cairns through the AFL playing ranks and more recently as a key figure in the game’s ongoing development, he was a genuine contributor.

To commemorate Clarke, AFL Queensland and the Clarke family launched The Troy Clarke Scholarship in 2014 to support a 14 or 15 year old person from regional Queensland to reach their potential both academically and in Australian Football.

For more information on the scholarship: