Aspley Hornets to join QWAFL in 2019 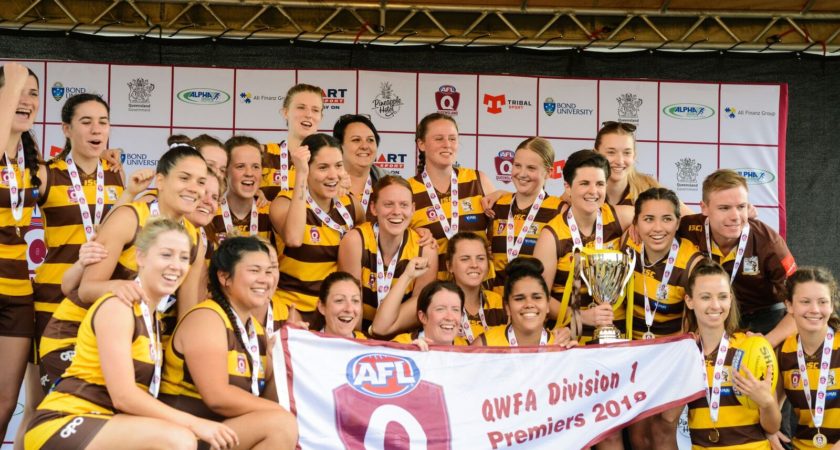 AFL Queensland have formally advised the Aspley Hornets of their entry into the 2019 QWAFL competition.

Having been unsuccessful in their submission to join the State’s premier women’s competition in 2018, the recently crowned QFA Division 1 Premiers have worked diligently over the past 12 months to develop a program that is focused on creating opportunities for talented females to play at the highest level of community football in the outer Brisbane North and Moreton Bay region, whilst also catering for those looking to develop their craft and play AFLW.

AFL Queensland State Football Operations Manager, Barry Gibson, said that the club has had a clear focus on developing a high performance environment for female players and their elevation is a testament to the program they have developed already.

“Aspley have been clear for some time of their desire to play at the highest level and with the work undertaken over the past few years were are extremely confident they will come into the competition and be competitive, similarly it’s a fantastic opportunity for those female athletes from the outer Brisbane North and Moreton Bay region to have a State League team located close by, Mr Gibson said.

“As a club already competing in the NEAFL high performance space, we are confident the learnings that come with that will ensure the Hornets have a high quality female program that is adequately resourced and supported”, Mr Gibson added.

Gibson was confident that Aspley’s entry into the QWAFL would have minimal impact on existing QWAFL clubs, with similar list management build rules to be applied to Aspley as occurred when Bond University entered the competition in 2018.

“In their pitch Aspley’s football department were really clear on what their list management strategy looks like and where their focus is in respect to recruitment and retention. They were fully understanding and accepting of the list management restrictions that comes with being a new participant in the QWAFL”, Mr Gibson said.

Aspley Hornets Club President, Dale Sherwood, was delighted with the news of his club’s promotion into the QWAFL.

“We are extremely grateful and appreciative of the opportunity to compete at this level and we look forward to developing and growing the women’s program in our region” Mr Sherwood said.