Around the world with AFL 9s 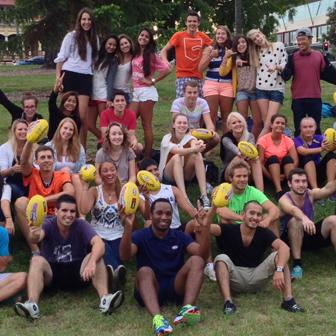 AFL Queensland’s Multicultural Development Coordinator Keith Shangare loves to share his passion for AFL, most recently with a group of students from Education First (EF).

EF is an English language college in Brisbane which hosts hundreds of students each year from across the globe, offering the chance to engage in everything the local culture has to offer.

Keith’s session had a great turnout with nearly 50 students from Latin America, Europe and Asia kicking off their experience with an intro to AFL video. There were plenty of ‘oohs and aahs’ as they witnessed the ‘specky’ for the first time and they marvelled at what the AFL’s best can do with the Sherrin. The biggest gasp, however, was left for some text-book hip and shoulder bumps.

After the quick intro to AFL and its history the group took a short walk to Musgrave Park in South Brisbane for a skills session. They tested themselves at kicking, handballing and marking, and there was the odd question about why our footballs are a funny shape from students with a predominantly soccer background who were holding and kicking a footy for the first time.

“It’s great to see such a big turnout for our first session,” said Shangare.

“The students were all really excited to have a kick, and we will keep them involved through umpiring, as well as getting them to come along to a Brisbane Lions match later in the year.

“This program has proven to be a great way to engage people from CaLD backgrounds and creates employment opportunities for some of the students through our Umpiring courses.

“This is an exciting opportunity for the students to experience a part of Australia’s sporting culture through AFL.

EF is the first of a number of English language colleges in South East Queensland that will be partnering with AFL Queensland to further engage multicultural participants throughout 2014, with the ultimate goal being a round robin competition between our English college partners.