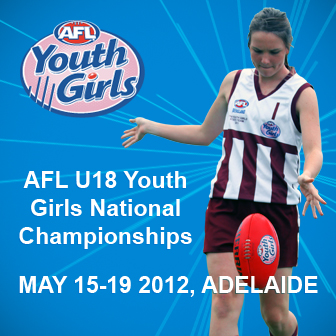 Queensland lost to Western Australia by 13 points in their first match of the 2012 Under-18 Youth Girls National Championships which kicked off in Adelaide today.

Queensland Sunfire burst out of the centre and quickly put a score on the board. For the next half the contest was a fierce arm wrestle between the 50s with neither team able to get flow into their forward 50.

Team WA must have received a rev up from coach Michelle Harris during half time because they scored 2 quick goals in the first minutes of the third quarter.

The Black Ducks had treble the inside 50s of Queensland but could not take advantage due to the resolute defence from the Sunfire backline.

The final quarter was played mainly in the Queensland forward line. WA could not get the ball passed their half back line and when they finally did Sabrina Traub gained front position to bullock the ball in for a goal.

Queensland  can be buoyed by their crisp ball handling and running in numbers.

The Championships will run all week with games to be played at venues throughout Adelaide.

Queensland’s next game is against NSW/ACT at Richmond Oval, 10am Wednesday.

The final will be played after the Port Adelaide v North Melbourne match at AAMI Stadium on Saturday May 19.

At the conclusion of the Championships an All-Australian team, coach and field umpire will be named.