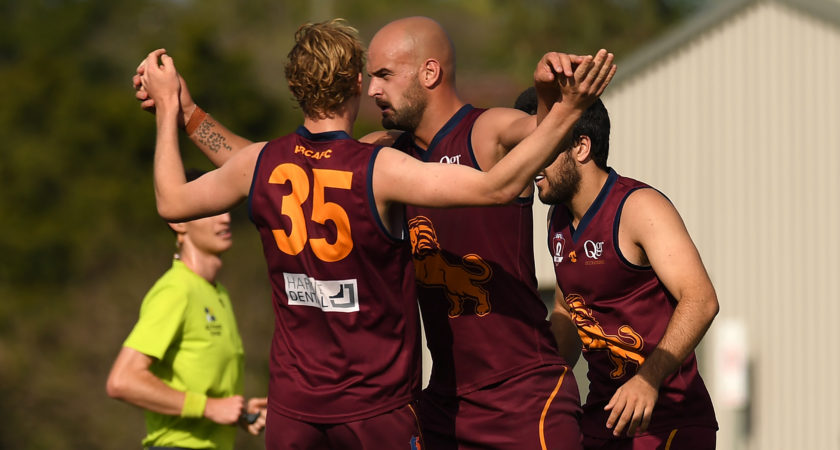 A five-goal haul from Palm Beach Currumbin forward John Anthony was enough to seal the Joe Grant Medal as the former AFL veteran was judged best afield in the Lions’ QAFL Grand Final win over Broadbeach.

In a contest where no lead exceeded 28 points until the time on period of the fourth term, Anthony’s performance in front of goal proved the difference.

He was constantly in the thick of it in a battle with Broadbeach stopper James Royes, who only a few days prior, was hit by a car while cycling on the side of the road.

Royes battled well, but his smaller statue helped give Anthony the advantage, but the latter, having won his first premiership in 15 years of football, was full of praise for his game-day opposition.

“Roycey during the week, he unfortunately got into a bit of an accident so he’s a bit sore, but he still played his heart out,” Anthony told aflq.com.au.

“I made a few mistakes, but I managed to get a few sausage rolls and that obviously went a long way to help out.”

Anthony now joins a long list of Joe Grant Medallists since the medal was first awarded to Zillmere’s Kevan Sparks in 1981.

The former Collingwood and Fremantle forward was involved in another highly intense contest with the Lions’ Gold Coast rivals. The physical nature of the high-stakes encounter often meant the forward received heavy attention from Cats’ defenders.

As the two clubs emerged throughout 2018 as the premier teams of the QAFL this season, the rivalry between them intensified, but Anthony suggested the two clubs have immense respect for one another off the field.

“I probably don’t help myself now and I tend to draw in a lot of attention because they’re going to try and put me off of my game and I’m just going to fire back,” he said.”

“I cop it every week but as you saw at the end of the game, there’s a lot of respect between the two clubs. Obviously on the ground, we hate each other but off the field, there is a lot respect.”

“Broadbeach are tough opponents, they really are, they have a really strong supporter base and they have some great players, but it was our year and I’m just so proud.”

Anthony’s Lions became just the fourth side this century to go back to back in the QAFL competition as the side etched themselves as one of the competition’s top teams.

"We had the belief and the reward is a premiership": Palm Beach Currumbin go back to back in QAFL
PBC Reactions following Grand Final win