ANOTHER MEDAL FOR AGELESS DICKFOS 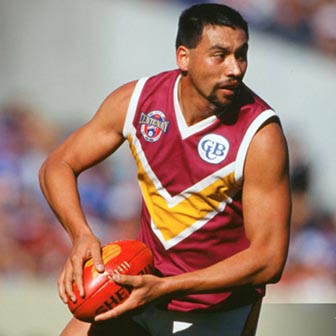 One of Queensland football’s greats, Danny Dickfos,  continues to win accolades in the shadows of his 40th birthday.

The former Brisbane Lions star shared the Bill Ryan Trophy for the best player in Division Two as judged by independent observers on Monday night.

The 2000 Grogan Medallist with the Northern Eagles, formerly Windsor-Zillmere, Dickfos was an icon of that club where he played a record 250-plus senior games.

He has spent the last three seasons with Sandgate in the Pineapple Hotel Cup and has the Hawks poised to win their first premiership in this competition after winning the second semi final last weekend.

It was a trademark Dickfos pack mark and goal that helped the Hawks home over Noosa in a thriller.

Dickfos, who turns 40 at the end of this month, has played in the vicinity of 500 games of senior football across the QAFL, AFL and Pineapple Hotel Cup.

He notched 65 games with the Brisbane Bears/Lions from 1996-98 and was a member of the Queensland Team of the Century.

Hawkins is a former Southport and State star who is enjoying his football back at his ‘home’ club Coolangatta, while ex-Redland Bomber Faulkner was a standout with battlers Mayne.

Surprisingly, none of the trio featured in the Duncanson-Todd Medal cast by umpires’ votes.

That honour went to former Riverina player Brad Horn, who polled 24 votes in his first season with Palm Beach-Currumbin.

Another first year ex-Ovens and Murray League member Luke Brauer tied with Horn on 24 votes but was ineligible due to a suspension received in the last game of the season.