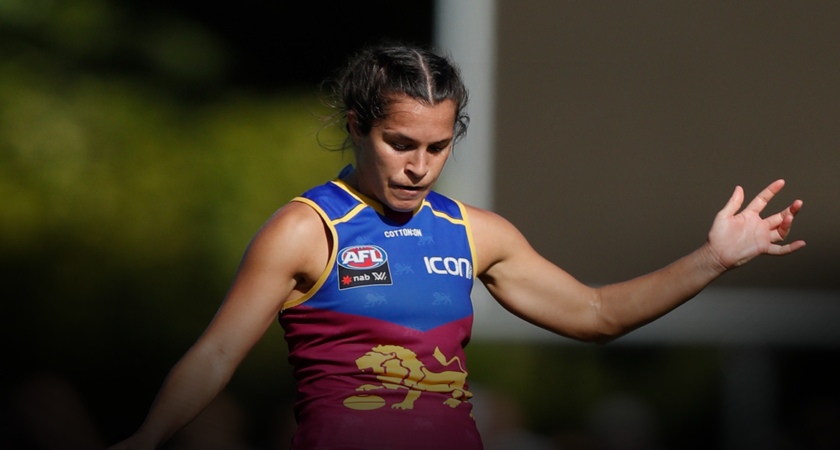 Ally Anderson has been crowned the Lions’ AFLW Best & Fairest for the 2019 season, 10 days after being named an All Australian for the first time. The 22-year old was presented her trophy by Chairman Andrew Wellington in front of delighted guests at Hillstone, St Lucia earlier this evening.

The 22-year-old finished top of the leader board with 95 votes, closely followed by runner-up Nat Exon who had 84 votes. Last year’s winner Kate Lutkins finished in third place with 78, while inaugural winner Emily Bates came fourth with 76.

Anderson had a breakout third season in the midfield averaging 21.0 disposals per game, amongst the highest in the competition and five tackles. In three seasons she has played all possible 23 games for the Lions.

After her Round 4 performance over the Bulldogs, she was voted AFL Players MVP of the Week and polled maximum Coaches Votes.

Lions Women’s CEO Breeanna Brock said it has been a privilege watching Anderson flourish in the Lions program over the past three seasons.

“Ally is one of the hardest working players at our Club, so we are delighted to see her rewarded with this recognition,” Brock said.

“She has brought great enthusiasm over the past couple of years.”

“Having the likes of Lions premiership winners Simon Black and Clark Keating helping her with her craft work, has seen her game go to a new level.

“We are all thrilled she received this honour.”

Anderson is also well respected for her work off the field with her involvement in the Club’s Reconciliation Action Plan and Deadly Choices program.

Coach Craig Starcevich presented Nat Exon with her trophy as runner-up. Earlier in the evening she was recognised by her teammates as Players’ Player. Kevin and Jenny Power from the Sunshine Coach Supporters Group funded the award and joined last year’s receipt, Kate Lutkins, on stage to present Exon with her prize.

Captain Leah Kaslar presented Jesse Wardlaw with the inaugural Best First Year Player award. The 19-year-old was one of nine players to make their AFLW debut for the Lions in 2019. Wardlaw was outstanding in the ruck and forward line and played all seven games.

Senior player Sharni Webb was awarded the All for One trophy on stage by AFLW Assistant Coach (Ruck) Clark Keating. This is awarded to the player who best demonstrates the Club Values of High Performance, Cutting Edge, Care and Connected.

Defender Shannon Campbell was presented the Most Relentless award by her backline AFLW Assistant Coach Daniel Merrett. This is awarded to the player who overcomes adversity and never gives up, is courageous and lionhearted.

Vice-Captain Lutkins, a 2019 All Australian squad member, was presented the Most Competitive award by AFLW Assistant Coach Brent Staker.