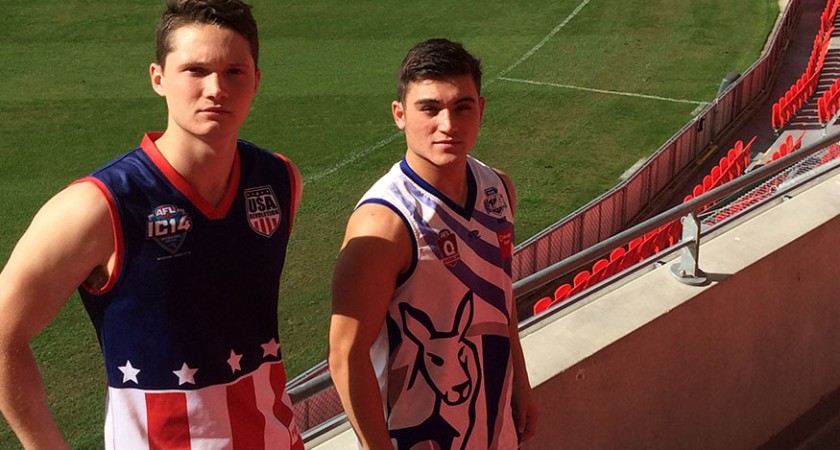 While travelling five years ago, Vigus met now President of the USAFL Denis Ryan and has continued this working relationship returning to America every October to help with the running of the National Championships.

Moving forward, the two men are now hoping to raise awareness and promote AFL throughout the US with the help of what they want to be an ongoing swap between Aussie and US players.

This year marks the first exchange with Daniel Lehane and Bryce Milner flying over to spend time on the Gold Coast to hone their skills not only as players, but as coaches and mentors for young aspiring athletes.

Lehane and Milner were selected by Ryan for their talents and desire to learn as much as they possibly can before returning to America.

The mission of both the Australian and American communities is to create positive awareness about the sport and to provide multiple ways in which people can get involved.

Ryan has taken on the responsibility of representing Australian Football within the US and his mission is focused on the promotion of the culture of the popular Australian sport.

As part of their footy exchange, the boys assist Vigus in the running and operations of the AFL 9’s competition held in Robina.

Both Ryan and Vigus hope that the skills learnt from this exercise will be transferable when the players return home and take on the task of boosting participation across all levels.

Vigus said that both Lehane and Milner have exciting skills to offer to the program and he is looking forward to helping both of them develop as successful players.

“Milner was chosen because he stood out the most in his college team… Lehane we already know is talented,” he said.

“We look forward to helping both of them develop and we hope to give them the best chance possible.”

Both Lehane and Milner have both been assigned to play for local club Robina and will have the opportunity to play the remaining games of the season.

Lehane was picked up quickly from his first game in the reserves to move up to the senior team for the Roos and Milner will be given his chance to show what he is capable of in the next week.

Off the field, both boys are shadowing Vigus in the day-to-day operations of competition development and are spending time completing coaching accreditations, umpiring courses and spreading awareness through Auskick programs and Sport Ed.

In the last week the boys have been helping out with the school holiday development camps and Vigus says they’ve had a positive impact on the younger players.

“The boys are out at schools engaging with the kids like no other staff member… the kids want to know their story and how they became involved in AFL,” Vigus said.

Lehane and Milner’s stories are different in that Lehane pulled on his first footy boots as a 13-year-old, where Milner fell into the sport accidentally just last year.

This differs from the majority of Aussie senior role models, so the kids have been enjoying picking their brains about how they found out about the sport they all love.

AFL in America is still a bit of a dark horse and awareness is crucial to its further development.

Vigus hopes that when Milner returns to his college Texas Tech in early September he will be well equipped to start up and run new competitions to get some of the 40,000 odd students involved.