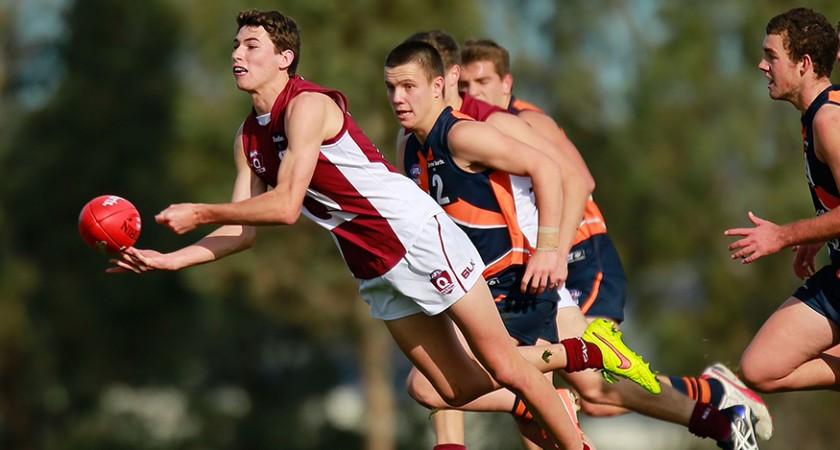 We are now half way through the Allies campaign in the NAB AFL Division One Championships, so we thought the time was right to check in on how the 11 Queenslanders who were selected in the initial squad are travelling.

The Allies fly to Melbourne this week for their final two games of the championships, on June 24 and 29, up against Vic metro and Vic Country.

Both games will be broadcast live on Fox Footy.

After a quiet first game, Scheer stepped up on Saturday. He finished with 17 disposals, which was equal second highest four the Allies, had five clearances, and was named in the best. The inside bull went to work.

Definitely winning his fair share of the footy, and has been a solid contributor in both games. Rolls was named in the best after the game against South Australia, finishing with 17 possessions off the half-back line.

The fact that he is in the conversation as a possible number one pick says it all. Without dominating, Bowes has contributed well in both games. He was the only multiple goal kicker for the Allies in game one against South Australia, and finished with 13 disposals in game two.

Returned to form last game with a really good contribution up forward. Moved well, took some strong marks, and was a genuine target. Was a little quiet in game one, but is working himself into the championships nicely.
Declan Watson

As solid as they come down back. Watson equaled Scheer with 17 possessions against WA, was his usual, unbeatable self one-on-one, took five marks, and had three rebound 50’s. He continues to make it hard not to pick him in the draft later this year.

Injured himself in the first ten minutes of the first game, which has kept him out of the second game. Looks like he will be available for selection for the next two games.

Only played the one game, which was last weekend, but slotted in reasonably well. Only had the seven possessions, but used it well, wasn’t rushed, and ran hard.

The bottom age player has done more than enough to show just how much a force he will be next year. Hasn’t kicked a massive bag yet by any means, but it’s the little glimpses, the big marks, the long goals, that has made him the talk of the bottom age town. Look out for an even bigger 2017 in his draft year.

The second half of the first game was when Williams really started to get the wheels turning. He found the space we are accustomed to seeing him have down the wing, was able to gap his opponents and break the lines. He didn’t play in the second game.

Max Spencer
Yet to play