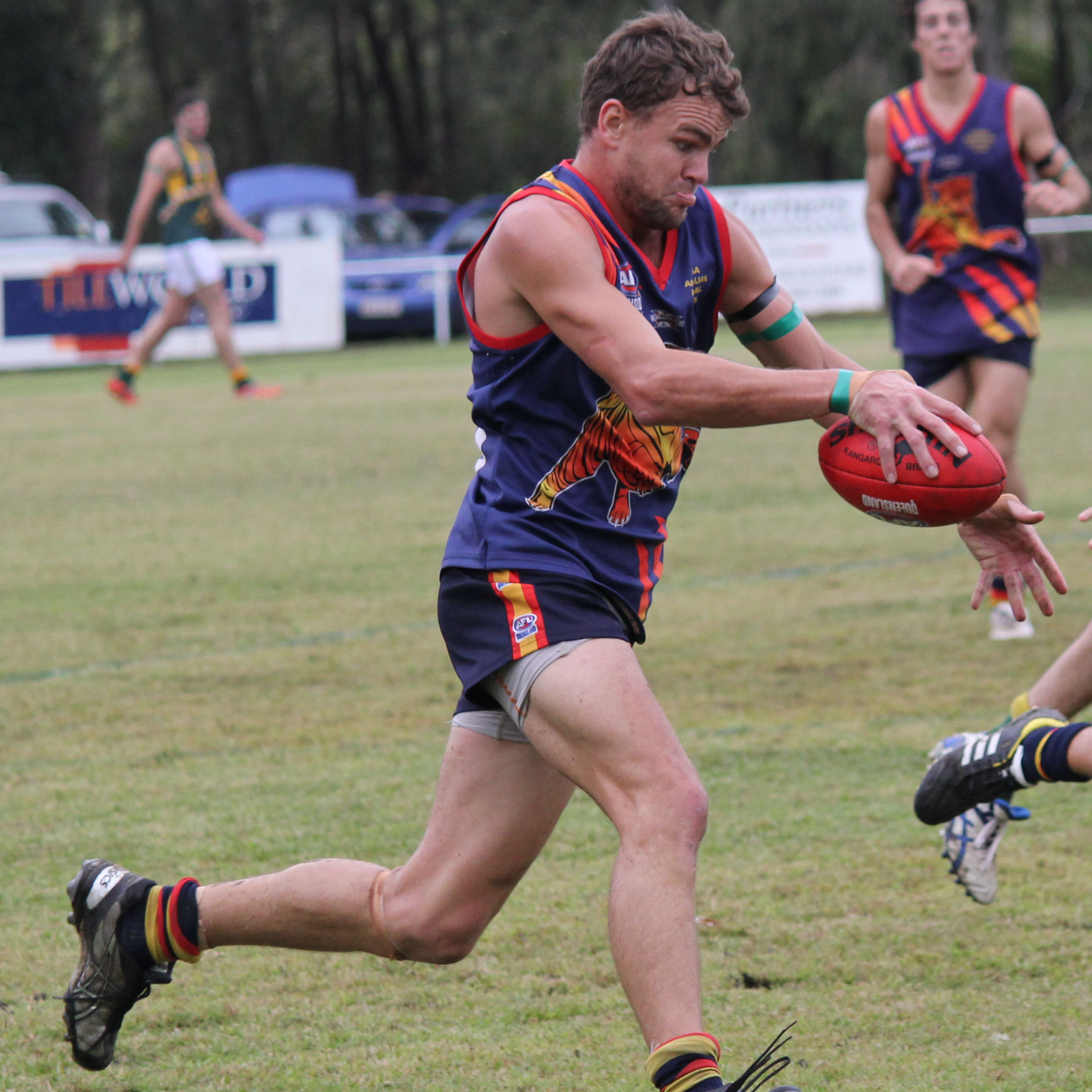 Noosa survived a last-quarter onslaught from Maroochydore to claim its first win of the season.

After dominating in the first three quarters, holding the Roos to only a point in the third, the Tigers held a 28-point lead at the final change, and the game looked theirs.

Maroochydore kicked three of the first four goals in the final term, to reduce the margin to only four points with less than five minutes to go, before the Tigers’ Brendan Wulf kicked the sealer.

Noosa coach, Wayne Fletcher, said the win was a massive confidence boost for his charges.

“That was a win of character,” Fletcher said.

“I didn’t think at any stage that we would lose today. Even when they got within a kick, I just thought, our blokes wouldn’t let it slip today.”

“You could see the efforts, at the end of the day when the game was there to be won.”

The Tigers were led by superstar captain, Peter Trompf, at centre-half back, who played yet another strong game for the club, while Jake Fulton took home the medal for best on ground.

Sixteen year-old, Seb Rogers, also continued his strong form early in the game, in the midfield.

With plenty of past players in attendance, as part of the Tigers’ Past Players day, the derby was a massive occasion for the Tigers, and an equally significant win, Fletcher said.

“It meant a hell of a lot to the footy club,” he said.

“It’s always very special to beat your arch rival mate and for us…and I think the players really deserved the victory.”

Maroochydore was as disappointed as the Tigers were jubilant, with Roos coach, Brett Maloney, said the loss was “shattering.”

“It was gut wrenching,” he said.

“We didn’t deserve to win, don’t get me wrong, but we left far too much to do too late in the game.”

Maloney said it was frustrating not to be able to capitalise on their momentum, after a dominant win over Coolangatta last week, but it wasn’t panic stations just yet.

“We’re on a bit of a roller coater, and we need to iron out those kinks and just be a little bit more consistent.

“We don’t throw the baby out with the bath water. We just get on with it.”

Youngster, Cameron Stevenson, was solid for the Roos in his return from state under-18 duties, while Michael D’arcy worked hard all day, at centre-half forward.

Both Sunshine Coast sides face big challenges next week, with Noosa taking  on Surfers Paradise at Sir Bruce Small Park on Saturday, while the Roos face Springwood at Lowe Oval.

Burleigh is still winless in the Allied Pickfords Cup, after a seven-goal loss to Palm Beach.

The Bombers competed for much of the game, but couldn’t match the Lions’ exceptional skills and ball use.

Bombers coach, Shane Williams, rated the performance his side’s best of the year.

Palm Beach continued to prove their status as one of the benchmark sides of the competition, led by strong performances by forward pocket, Dean Shegog, and Jack Vanderfeen.

Chris Burrell had a solid game for the Bombers, restricting the influence of Lions playmaker, Angus Munro.

The Bombers will now look to Saturday’s clash with UQ at Oval 7, while the Lions take on Mayne away.

“We’ve been good the last three weeks but from what we‘ve played Palm Beach are by far the best team and we were super competitive with them all day.”

“They struggled to get their game flowing and our pressure and intensity was unbelievable.”

“The difference was their use of the footy.

”They’re a really well skilled side and we just tended to turn the footy over a couple of times and it hurt us.”

“Burleigh really took it to us, they’ve improved dramatically.”

“Our midfield moved pretty hard but we weren’t able to capitalise in front of goals.”

“Conditions were pretty difficult for both teams, so it was good to get the win and four points moving forward.”

Surfers Paradise bounced back from last week’s loss to the Gorillas, with a solid win over UQ.

After a strong start, the Demons slipped in the second, allowing UQ to reduce the margin to eight points at half-time, before steadying in the latter half.

Demons midfielder, Ryan Dienjes, was also back to his damaging best for the side, along with Jordan Pope and Taylor Rolfe.

UQ’s Jarrod Prakelt continued his stellar form, with six goals, while young midfielder Jack Pershouse was among the Red Lions’ best once again.

Midfielder/forward Alex Bateman, showed plenty of potential on debut, as one of four 17 –year-olds in the Red Lions’ side yesterday, along with Zac Southern, Jordan Morrison and Zac O’Gorman.

“We were certainly happy with the result, but in saying that, there’s a lot to work on.”

“Our second quarter was horrible. Our work rate dropped, our level of intensity dropped and we allowed them back into the game far too easily.”

“I was very happy that when the game was in the balance, our leadership group really took control of the game, got their hands on the footy and lifted their teammates.”

“For us, yesterday came out of a poor start. It was six-to-one (sic) in the first quarter and that ended up being the margin, just about.

“In the first quarter, we really deviated from structures and ultimately paid the price.”

“It was exciting to have a young team and play those players and be competitive.”

The Western Magpies snapped a two-game losing streak against Sandgate, to stay among the top flag contenders.

Spearheaded by an eight-goal haul from Brady Allen, the Magpies were simply too good for the Hawks, showing their experience in the win.

Sandgate’s small brigade battled hard, led by a four-goal haul from Corbin Dickfos, but it wasn’t enough to reel the Magpies in.

The win puts the Magpies third, as one of three teams on 16 points, after six rounds.

“We need to be a lot more consistent out of the middle with our on-ballers and our forward structure was inconsistent.”

“We rely on the big blokes to do some work and assert some strength – shepherd and be aggressive in a contest – and we were just lacking that completely.”

“Whilst we’re going okay, we’re a long way from where we need to be.”

Mayne survived a seven-goal final term barrage to notch up its third consecutive win, over Coolangatta, on Saturday.

The Tigers held sway for much of the game, but the Blues lifted in the last quarter to draw within a goal.

Mayne captain Caleb Brown was again strong for the Tigers, while experienced midfielder, Shaun Daly, produced a stellar performance in the middle.

“ It was one of those last quarters where we just hung on.”

“We just couldn’t stop them, they were unstoppable (in the last quarter).”

“ We had some guys play a few different positions and they did that well.”

“I think we shocked ourselves a little bit by playing so well in the fourth quarter.”

“Coming from where we have, we want to build on every positive we can. I know it was disappointing but we’ll take that fourth quarter and try and build on that.”

“We let too many easy goals through. When they scored, they scored freely and there was no pressure when they were going forward.”

The Pumas were on the back foot early, and looked to be missing the influence of Albert Proud, but stormed home for the second week in a row to take the points.

Captain Mark Thompson was a catalyst for the Pumas, kicking three goals in the second, and finishing with five for the game.

“Yesterday ,the club felt like we could compete in the finals fairly strongly. That’s a great feeling.”

“I don’t think anyone’s felt that for a very long time.”

“Without Proud early, we missed that intensity– Thompson gave us three quick goals in the second and kept us in touch at half time.”

“The belief of the boys is pretty good and they’re starting to know what to do out there in those (tight) situations.”