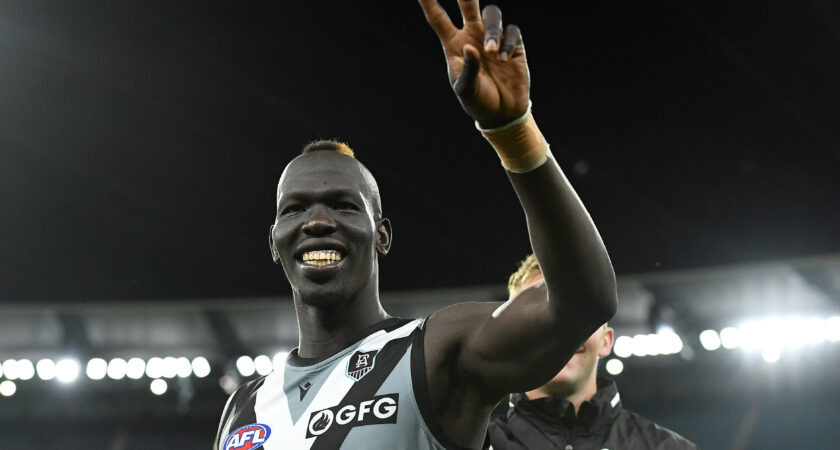 The name Farry is synonymous with Australian football on the north side of Brisbane. At Sandgate, Windsor-Zillmere and Aspley they boast a family connection that spans more than 50 years and three generations.

Lance Farry, a player turned senior administrator in the 1960-70s, and his son Paul, a Queensland representative in the 1980s, head the family list that includes too many siblings to count.

Now, 35 years after he was a member of the first Brisbane Bears development squad in 1987, Paul Farry has been acclaimed as the man behind one of the great AFL success stories, Aliir Aliir.

Speaking recently with Garry Lyon and Tim Watson on SEN radio in Melbourne, Aliir told how Farry had been the most important influence in his football after coaching him as a teenager at Aspley.

“He (Farry) has been massive for me … he helped me get into footy and I still walk to him regularly,” said Aliir, who has been one of the recruits of the 2021 AFL season after moving from Sydney to Port Adelaide.

“He will often text me before a game or when I do something special like that spekky a couple of weeks ago … not that I’ve taken too many spekkies.

“He’s just a really great guy who has had a huge impact on my life.”

Farry, now assistant-coach at Coorparoo, coached Aliir at Aspley after he had taken up football in 2009 when Kedron High schoolmate James Ives, son of QAFL Grogan Medallist Peter Ives and later a senior NEAFL player with Aspley, invited him to ‘come and have a kick’ with the Aspley U14s.

It was the start of a football story second only to the story of Aliir himself.

Aliir was born in the Kakuma refugee camp in Kenya to Sudanese parents who spent six years there after his parents had fled Sudan to escape a bloody civil war. It was a camp that housed around 150,000 men, women and children.

In 2002 an eight-year-old Aliir and his family moved to Brisbane, where Aliir’s uncle was living. He was a basketball fanatic but after his chance introduction to football he took a  liking to the Sherrin.

A member of an extended Queensland U16 squad, he was invited to an AFL camp in Sydney ahead of the 2010 Australian U16 championships and eventually represented a World XVIII at the carnival.

At the camp he met Reuben Riak, another Sudanese boy whose mother was still in Uganda. He was living with his aunt in Perth. The boys became friends at the camp but it wasn’t until a conversation about tunnels on a team bus ride from the Blacktown Olympic Park that they were more than friends.

Aliir mentioned that the Sydney tunnels were similar to those in Brisbane, prompting Riak to ask Aliir if he knew a girl call Yar, who had been trying to contact him because their mother’s were sisters.

The penny dropped. Yar was Aliir’s sister. The boys’ mothers were sisters and they were cousins.

Aliir represented the World team at the U16 carnival again in 2011 and in 2012 he played with a Queensland U18 side and made his senior debut at Aspley.

In 2013 he moved with his mother and four brothers and sisters to Western Australia as his mother reconnected with her sister after she moved to Perth.

There Aliir joined WAFL club East Fremantle and was an overage member of the Western Australian U18 side, slotting into the Sandgropers’ defence after he had played primarily in the ruck with the Queensland U18s.

Idolising the West Coast Eagles and inspired by Nic Naitanui at the time, his football continued to improve and in November 2013 he became the second player of Sudanese heritage behind North Melbourne’s Majak Daw to make it into an AFL playing list. He was drafted by the Swans at pick #44.

By beautiful coincidence he made his AFL debut at the Gabba against the Lions in 2016 to begin a 64-game stint with the Swans which included a minor but devastating knee strain which kept him out of the 2016 grand final and ended when he was traded by the Swans to Port Adelaide late last year.

An enormous role model for multi-cultural children across Australia and an official AFL multicultural ambassador, Aliir admits his move to Port was “a shock”.

“It was not something I expected after I didn’t have my best year last year and they (Port) finished top. When first I heard about it I didn’t expect anything would come of it, but when I realised it was serious I had to think seriously about it.

“I loved Sydney. They embraced me from day one and I have so much respect for the club and so many friends there. Last year I played a bit all over the place – back, forward and in the ruck – and although I enjoyed that I think I play my best down back.

“I talked to my Mum and a lot of people and then I had to talk to the Swans because I still had one year of my contract to run. But in the end it came down to four years at Port against one year at Sydney so I decided a bit of security would be nice.”

With the Swans tight in the salary cap and desperate to bring in a ruckman they had no option after Tom Hickey committed to move to the Harbour City to trade Aliir to Port in exchange for a future second-round pick.

“Whilst we would have loved to see Aliir stay, he indicated to us a desire to be traded to Port Adelaide, and to take up the opportunity of a long term deal on offer,” Swans GM of Football Charlie Gardiner said at the time.

“Aliir has been a great contributor and popular member of the team over his seven seasons at the Swans. On behalf of everyone at the Sydney Swans, we’d like to thank Aliir for the impact he has had during his time with our club and wish him and his family all the best for the future.”

Aliir says Port coach Ken Hinkley has made him feel “really comfortable” at his new club after an odd beginning to life in Adelaide, and had given him a license to use his outstanding athleticism and flare as he sees fit.

“It wasn’t the best of situations, having to quarantine when first I got to Adelaide and then having to have jaw surgery. But I’m just grateful to go from one great club to another.”

Aliir has quickly established himself as one of the premier intercept defenders in the competition, and has become the source of many attacking moves from the back half.

Coincidentally, nine weeks into the season Hickey and Aliir sit comfortably alongside the Western Bulldogs Adam Treloar, picked up in a controversial deal with Collingwood, as the three top recruits of the 2021 season.

Looking forward to the Round 15 match against the Swans in Adelaide, Aliir ranks seventh in the League in intercept marks and 12th in intercept possessions after the Power’s loss to the Western Bulldogs last weekend.

In other Queensland news from Round 9:- 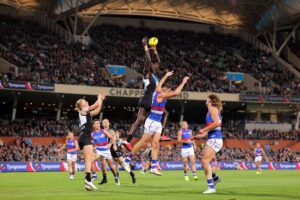