ALEX SEXTON: BACK TO SCHOOL 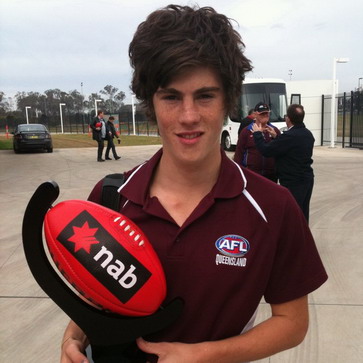 Springwood youngster Alex Sexton reflects on the recent NAB AFL Australian U16 championships which could change his life forever.

Alex Sexton pulled his school trousers, white shirt and burgundy tie out of the wardrobe this morning and went back to school at Chisholm Catholic College, Cornubia.

It was just another day for the unassuming Year 11 student and all-round sporting standout as he began Term 3 of the 2010 school year.

It was almost as if nothing out of the ordinary had happened over the holidays. And according to those who know him best, it was exactly the same Alex who returned to school as that which had gone on holidays late last month.

But something did happen over the holidays. Something very special.

Alex Sexton, 16-year-old North Melbourne fan who has long dreamed of playing at the elite level, took a giant step in the right direction.

He won the Alan McLean Medal for the best and fairest player in division two at the NAB Australian U16 Championships in Sydney,

Also, he was judged ‘Most Valuable Player’ in the Australia Post Queensland Young Scorpions.

It doesn’t guarantee anything, other than a couple of nice additions to his trophy shelf, but it does mean that the AFL world knows exactly who he is.

Kevin Sheehan, AFL Talent Manager, was glowing in his tribute of the classy half forward/midfielder’s performance at the national carnival, held at Blacktown Stadium, West Sydney.

“His composure, his attack on the footy, his speed, his kicking under pressure, his ability to kick goals when they really counted in the final game, his work through the midfield … he just glides over the ground beautifully,” Sheahan said.

“He’s got all the attributes. And at 185cm he’s that lovely size who you’d thing is going to develop into a perfect midfielder for AFL.”

Sexton was a clear standout in a Scorpions side which beat NSW/ACT by 70 points in game one, hung on against a bigger and stronger South Pacific side by 15 points in game two, and lost what was effectively the division two grand final to Tasmania by 23 points in game three.

He was judged the Scorpions best player in the first and third games, and was third best in game two.

Also, he was Queensland’s No.2 goal-kicker with a total of seven majors in the three games, and kicked four of the Young Scorpions eight goals against Tasmania.

It was a phenomenal performance from a young man who 12 months earlier had been considered a little too slightly built to play at the interstate level.

He recalls that at the time he was just 67kg. Now he’s 71kg. And committed to getting bigger and stronger all the time.

“I guess I was a bit disappointed at the time (to miss State U16 selection last year) but it taught me to try harder,” he said.

“It was all worthwhile in Sydney. It was a great experience and I learned so much being around so many good football people.”

Sexton, who moved with his family from Melbourne in 2008, wore Queensland colors for the first time at the U16 carnival in Sydney.

He had learned his football at Reservoir and later Keon Park in Melbourne’s north, having shown some of the skills that had earned father Warren two senior B&F awards at Reservoir.

Initially, the Sexton family, completed by mother Nicole and two younger sisters, settled at Shailer Park to be near family. Alex joined the Springwood Pumas for his first year of U16s in 2008 before the family moved out to Mt.Cotton.

He’s been a regular choice for the South-East Bushrangers since settling in Queensland but only this year has he really elevated himself.

It’s all happened pretty quickly after he began the season playing with the Springwood U18s.

Included on the supplementary list with QAFL club Mt.Gravatt so that he could play as a top-up player with the Brisbane Lions, he did so in Round 10 of the State League, kicking a goal and acquitting himself well against Southport at Coorparoo.

He’s also played two senior games with Springwood in the Pineapple Hotel Cup, and has starred for the Springwood U18s and the Queensland U16s.

He’s chosen to focus his sporting energies on football in preference to a multitude of options. He was a standout junior basketballer in Melbourne, is a top-level cross country runner, and has also excelled in cricket.

“I want to focus on football,” he said, having idolized Wayne Carey in his earlier years and now rating Kangaroos skipper Brent Harvey as his favorite AFL player.

Born on 3 December 1993, he was among the over-age contingent allowed in the Young Scorpions side at the U16 carnival under AFL rules.

Because he was born in 1993 he’ll also be eligible to taken by the new Gold Coast expansion franchise as a Queensland zone priority selection at the 2011 AFL national draft.

But right now he’s looking no further than the Springwood U18s, who sit unbeaten and on top of the U18 division two south premiership ladder under coach Paul Opreck.

He does so with the blessing of Springwood senior coach Brad Pollock – even though Brad would dearly love to have him playing regularly in his side.

“I’d play him seniors every week if I could but I understand he’s had plenty on and he wants to play with his mates and try and win a premiership. I’m happy with that – as long as he enjoys his footy,” he said.

Pollock is an unashamed Sexton fan. “No doubt he’s special kid and he’s got all the attributes. He’s quick, he’s got good skills, he’s footy smart, he runs to good spots, and he’s a young fella who kicks over 50m. How many guys do you see who do that at his age?” he said.

“In his second game in the seniors against Wilston-Grange he carried the ball out of the back half, had a few bounces and kicked a goal from the 50m line. I’ve not seen anyone do that in our competition this year.”

If you don’t count Australian rugby league legend Darren Lockyer, who was a Springwood AFL junior, that distinction presently rests with Derek Wirth, a one-game Brisbane Bears player who later forged an outstanding QAFL career with Redland and Mt.Gravatt.

Tony Lynn, former Brisbane Bears and Carlton player, also spent time at Springwood as a player and assistant-coach after his AFL career.

“We think Alex could be something a bit special and we just want to see him given every opportunity to be the best player he can possibly be,” said Hickman.

Sexton is pictured with the Queensland MVP Award and at the Young Scorpions Jumper Presentation, where he received his No.19 Queensland jumper from Brisbane Lions ruckman Jamie Charman (left) and Young Scorpions coach Ray Windsor. 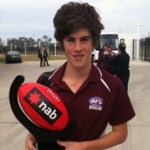 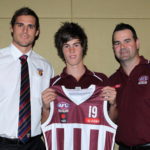