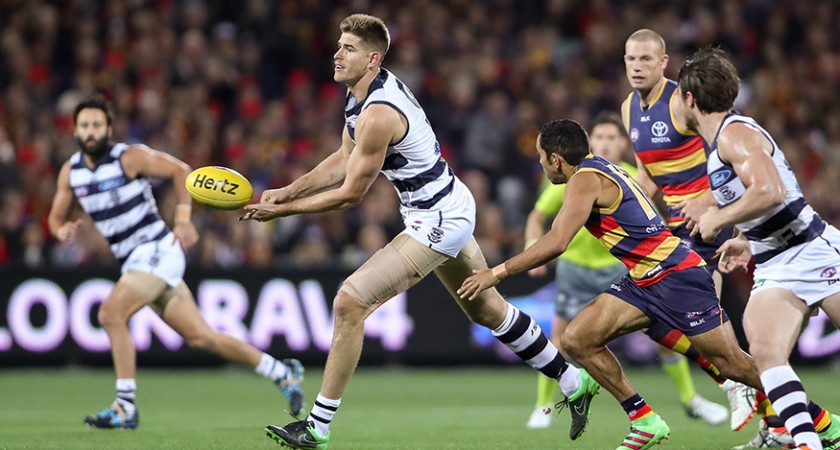 Smith, set to lead the Geelong ruck against Sydney at the MCG Friday night, was the only Queenslander named in the four sides Thursday night.

It will be the former Gold Coaster’s fourth final since joining the Cats last year and arguably the biggest game of his career.

But GWS, who will play West Coast at Spotless Stadium in Sydney on Saturday night, left the door open for the possible late inclusion of Sunshine Coaster Sam Reid.

Reid, already with a career-high 13 games behind him this season but still chasing his first final, was named among the Giants emergencies.

It would be a huge gamble by coach Leon Cameron given that Reid has not played at AFL level since Round 16 on 8 July due to injury, and has played only one game at any level since then.

He returned from ankle problems in the final round of the NEAFL, when the Giants lost to eventual premiers Brisbane at Spotless on 19 August.

He did have a run in an unofficial scratch match between the Giants Reserves and the Adelaide Crows Reserves in Adelaide last weekend, when both coaches were looking to maintain or build match fitness.

Reid, who has done a lot of good defensive roles for the Giants this year in what has been his best AFL season, is highly regarded by Cameron for his team-first approach and versatility, and it is not out of the question that he could yet play.

Already the Giants, unable to consider Devon Smith due to injury as they had hoped as they look to bounce back from a heavy loss to minor premiers Adelaide last week, already have made two forced changes.

Veteran veteran forward Steve Johnson and first-year player Tim Taranto have been included to replace injured pair Jeremy Cameron and Shane Mumford, who will not play again this year.

Johnson and Taranto were emergencies for week 1 of the finals with 19-year-old Harry Perryman, who has played eight games in his first season but none since Round 18.

This week the emergencies are Perryman, Reid and back-up ruckman Dawson Simpson.

It is a group designed by Cameron to keep West Coast guessing, with the possibility of the inclusion of Reid or Simpson in what could re-shape significantly the look of the Giants side.
West Coast, who survived an after-the-siren extra time win over Port Adelaide in Adelaide last week, made one change for their trip to Sydney, with Sharrod Wellingham recalled to replace 20-year-old Luke Partington. He was omitted after playing the last six games in a row.

Wellingham, a 170-game veteran and 2010 Collingwood premiership player, played the first nine games of the season but has struggled for consistent form lately and has added only three games since then in Rounds 15-16-21.

The Eagles emergencies are Partington and the experienced Chris Masten and Will Schofield.

Barring a late change Smith will be the only Queenslander in action tonight after Geelong overlooked forward/ruckman Wylie Buzza completely and Sydney named Aliir Aliir as an emergency.

Buzza’s exclusion from the 25-man match squad was a surprise after former Cats premiership captain Cameron Ling, now a well-respected commentator, had backed his return.

“I like him (Buzza), very much so,” said Ling. “And I think he’s important for them. He’s done enough this year to come back in for Friday night.

“He’s smart enough and good enough to take some grabs but the biggest thing he does is provide a brilliant contest up there and creates things for others. They feed off him.

“He’s mobile and ends up in the right spots. Plus he gets his hands on the footy. It’s not like he’s jumping blindly into packs and crashing them.”

He was dropped after Round 23 with Dan Menzel when the Cats were opposed to an under-sized Richmond opponent.

Said Ling: “I kind of get why he missed against Richmond because of the conditions and going a bit smaller but I would think he comes back in. In time he will be an exciting player as he starts to take more of those grabs.”

But while the enigmatic Menzel was recalled to face the Swans tonight Buzza was not. He didn’t even get a spot among the emergencies.

Coach Chris Scott, looking to avoid a straight-sets exit from the finals after they finished the home-and-away season second on the ladder, brought in Menzel and small utility Darcy Lang.

Lang is a 21-year-old with 42 games in the AFL, including eight this year. But he hasn’t played at AFL level since Round 14.

He will have been picked with a specific role in mind by coach Scott as the Cats look to go significantly smaller.

It wouldn’t surprise if he was given a shut-down role on Sydney 300th-gamer Jarrad McVeigh, who has been such a creative figure across half back in recent weeks.

The emergencies, which always take on a more important role at finals time, are Murdoch, Rhys Stanley and Jackson Thurlow.

Sydney, who made a late change last week to include Harry Cunningham for the injured Lewis Melican, go in unchanged after destroying Essendon last week.

Interestingly, Melican and Aliir, both key defenders, are in the emergencies with Dan Robinson.

Queenslander Kurt Tippett, not considered for selection last week due to concerns with his ongoing injury problems, was in the same position this week following the excellent showing against Essendon of Callum Sinclair.

In the VFL this weekend, Queenslander Brendan Whitecross is set to play for Hawthorn affiliate club Box Hill in a semi-final.

In other southern news, Townsville ruckman Jake Spencer was told this week by Melbourne coach Simon Goodwin his 10-year AFL career was over.

Spencer, who will turn 28 next month, has played 38 AFL games since joining the Demons as a rookie and making his debut in 2008.

The first Townsville product to play in the AFL, he has been an excellent back-up player for the club behind ruck star Max Gawn, willing to play a secondary role but capable of filling in when required.

It was a savage blow for Spencer earlier this year when he suffered a shoulder dislocation shortly after Gawn had suffered a low-term hamstring injury.