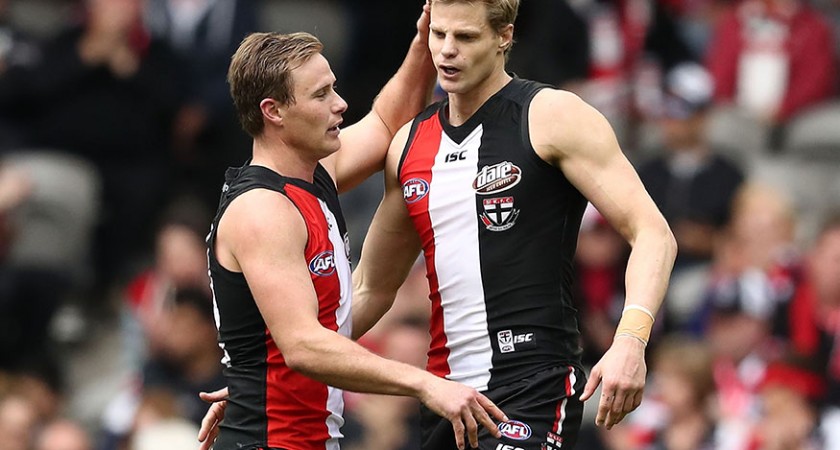 Nick Riewoldt bid farewell to the St.Kilda captaincy in spectacular fashion on Sunday. Or did he?

As the 33-year-old champion collected a career-best 21 marks and an equal career-best nine goals against the Brisbane Lions on Sunday there was speculation of a late push to retain Riewoldt as co-captain in 2017.

This comes after St.Kilda coach Alan Richardson confirmed on 19 August that Riewoldt would stand down as skipper next year despite being just six games short of the all-time AFL captaincy record.

Said Richardson at the time: “From a leadership point of view, for our club to grow, it’s time for someone else to take that mantle and be our next captain,” he said. “And we need Rooey (Riewoldt) to support that and not only has he supported that he’s also been driving that.”

After Riewoldt finished the 2016 season in such spectacular form there is a groundswell of support for him to share the role with his successor next year so that he can topple Stephen Kernahan’s AFL record for most games as captain.

Kernahan led Carlton 226 times. Essendon’s Dick Reynolds sits second on the list at 224 ahead of Riewoldt (220) after Riewoldt this year went past the Western Bulldogs’ Ted Whitten (212) and Brisbane’s Michael Voss (210).

But such is the high regard for Riewoldt at St.Kilda there have been fresh suggestions that he should be afforded the opportunity to write his name into the record books.

If not, then he will certainly remember fondly his 220th and last game as captain after he produced one of his very best games in the 2016 season-closer.

Reverting to his customary role in the forward line after spending much of his time this year on the wing, he turned the clock back a decade to single-handedly destroy the Lions.

He had a career-best 24 kicks to go with his career-best 21 marks and equal career-best nine goal and make it, statistically at least, one of the very best games of his 319-game career.

Remarkably, in testament to his ability to fight of the impact of time, his two other nine-goals of his career were in 2004 and 2006. His previous highest single-game marking haul of 18 was achieved three times in 2004-07-08.

It surpassed the 157-point haul of St.Kilda teammate Tom Hickey in Round 1 as the highest Champion Data ranking score this season by a Queenslander.

And, it saw Riewoldt slip past Brisbane’s Dayne Zorko to finish top of the overall Champion Data ranking points for the season after Zorko, who had led throughout the season, finished the season with 108 points on Sunday.

Collingwood rookie Josh Smith finished 11th in each category with 1311 points at an average of 72.8.

Zorko was also pipped at the top of the 2016 Queensland possessions list despite 30 possessions against St.Kilda. He finished with 471 – seven behind St.Kilda’s David Armitage after Armitage had 30 possessions in his 150th game. Riewoldt was third at 436.

The top 10 Queensland possession-winners were:-

Zorko, who missed one game through suspension and one for personal reasons, topped the possession list on an aggregate basis from Armitage, Josh Smith and Riewoldt.

Riewoldt’s nine goals saw him top the Queensland goal-kicking list for 2016 with 41.

The top 10 Queensland goal-kickers were:-

St.Kilda’s Armitage and Sam Gilbert joined Fremantle’s Lee Spurr and Lachie Weller as the only Queenslanders to play all 22 home-and-away games.

Geelong’s Zac Smith was selected for all 22 games but was withdrawn shortly before the start of 18 due to weather conditions. He played 21 games along with Riewoldt and Gold Coast’s Jarrod Harbrow.

In other Queensland highlights from Round 23:-