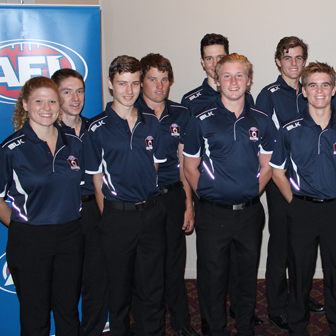 The revamped AFL Queensland Umpiring Academy kicked off with a bang on Wednesday Night with the 2014 Season Launch at the Pineapple Hotel.

Academy Umpires based in the South East and Northern Rivers attended he evening, along with their mentors from the NEAFL/QAFL Umpire Group and family members

Speaking at the event, AFL Queensland CEO, Michael Conlan congratulated the umpires on their selection to the Academy, and outlined the importance of developing more talented umpires in Queensland.

AFLQ State Umpire Manager Gary Fila told on the importance of the Academy program, and painted the picture of what it was like to umpire at the AFL’s most elite level.

Academy Coaches Aaron Hall and Troy Friend went through the program structure for the year, setting the standard in terms of what was expected, and explaining that it was important to maintain a functioning work/life/study/umpiring balance.

Each Academy Umpire was presented with a polo shirt and training t-shirt by CEO Michael Conlan, each with a unique heritage number. The heritage numbers  have been introduced to give each umpire a sense of ownership surrounding the program, and to start building a culture of tradition.

The umpires were also paired up with a mentor from the NEAFL/QAFL Umpiring Group, to ensure they have a direct link to the next stage of their umpiring career. These umpires were acknowledged and thanked by AFLQ Football Operations Manager, Craig Millar.

‘There are some exciting times ahead for umpiring in Queensland’ said AFLQ Community Umpiring Development Officer, Pierce Field.

‘Aaron and Troy have put in a multitude of work into preparing the program for the year, and with the passion and dedication they have for developing the next crop of talented umpires, we will no doubt see results at NEAFL/QAFL and AFL level in years to come’.

‘This week was the perfect opportunity to launch the program, with Queenslander Andrew Stephens making his AFL Debut at the Gabba.’

‘A big thank you must go to the Michael Conlan, Craig Millar and Gary Fila, along with our mentors from the NEAFL/QAFL Group, for their support and dedication towards the program. Without them, we would not have this quality program in place’.

‘We have set the standard now for the Academy, and the Coaching Staff and I look forward to taking this program forward in years to come’ Field Concluded.

The 2014 inductees into the AFLQ Umpire Academy, with heritage numbers are:

The Coaching Staff are: