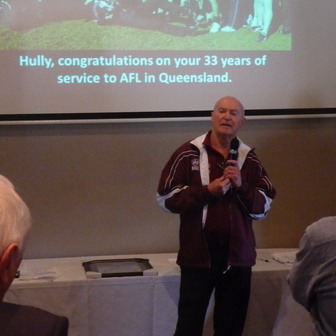 As well as AFLQ Chairman Darryl Bray and former AFLQ CEO Richard Griffiths who sent his well-wishes via a recorded message.

The tributes noted Hully’s commitment to the growth of Australian Rules football, particularly in regional areas of the state.

Since then, his football legacy has touched almost all regions of the state including Brisbane West, Darling Downs, Cairns, Wide Bay and the Sunshine Coast.

His most recent role, as AFLQ Talent Development Officer has seen him develop a plethora of talented footballers right through to AFL level.

One of Hull’s proudest achievements was the introduction of the Kookaburras programs, which provide a talent pathway for country footballers.

Tack this on top of Hully’s playing record as the 1967 Leading Goalkicker in the QAFL and the Grogan medallist the same year and you’ve got a lifelong love affair with footy.

Hully in return celebrated his time in the role by naming his “Top Ten” list of players that he’d had a hand in developing.

The Top Ten was selected from players in the last twelve years based not only on their on-field performance but also their attitude and demeanour off the field.

Hully will retire to the Sunshine Coast in order to spend more time with his grand children.

Yeronga through to women's final
U18 Central Best & Fairest a tie