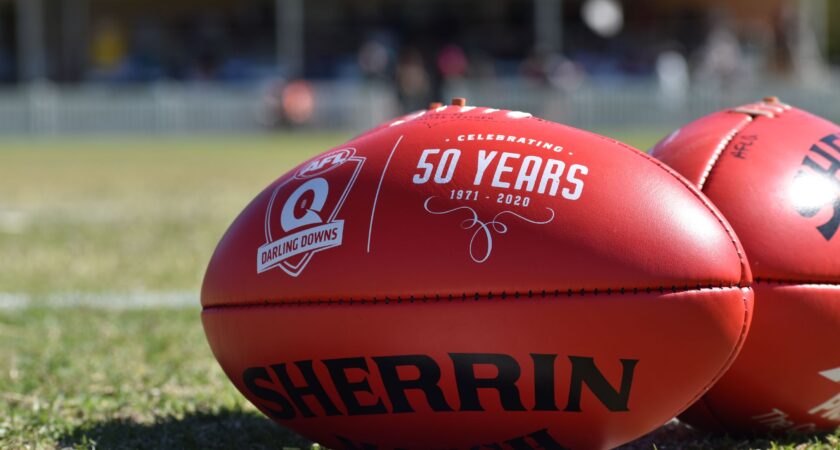 It was the year 1971 and three foundation clubs; Signals, Coolaroo and Aviation came together to mark the first season of the AFL Darling Down’s (AFLDD) Senior Men’s competition. They would be joined by a fourth club, South Toowoomba, in 1972.

Coolaroo and Signals met in the inaugural 71’ final, in a tight battle which Signals won by 3 points.

Fast forward 50 years, and footy on the Downs is stronger than ever. To mark the milestone, AFLDD is announcing a 50-year team, with Chris Guice chairing the selection panel.

“The selection panel for this 50-year team is delighted and honored to be involved in such an exciting project,” said Chris.

“We will leave no stone unturned in making sure we have covered all periods of Darling Downs Football since it commenced in 1971.”

The panel will initially name a ‘Best 50 of the 50’, with that squad to be published in the coming weeks.

A final team of 22 shall be named in position, plus the coach and will be named at the senior presentation night at the end of the season.

The team will be selected based on a range of criteria, including but not limited to;

“AFL Darling Downs has a proud and successful history over the last 50 years and being selected in the initial 50 player squad is an achievement in itself and one to be very proud of,” said Chris.

“We are sure this shall create great interest and no doubt generate debate, after all isn’t that what footy is all about!”

“It’s been a privilege to work with Chris and the Panel on this 50-year team,” he said.

“Chris and the panel have been working tirelessly and diligently behind the scenes to develop the list of the region’s best players spanning 5 decades. Whilst projects like this will always spark debate, their dedication in putting this list together is second to none.”

“This project has already uncovered many stories and tales of the last 50 seasons, and I look forward to the project fueling conversation and debate across the many generations of footballers and supporters alike.”