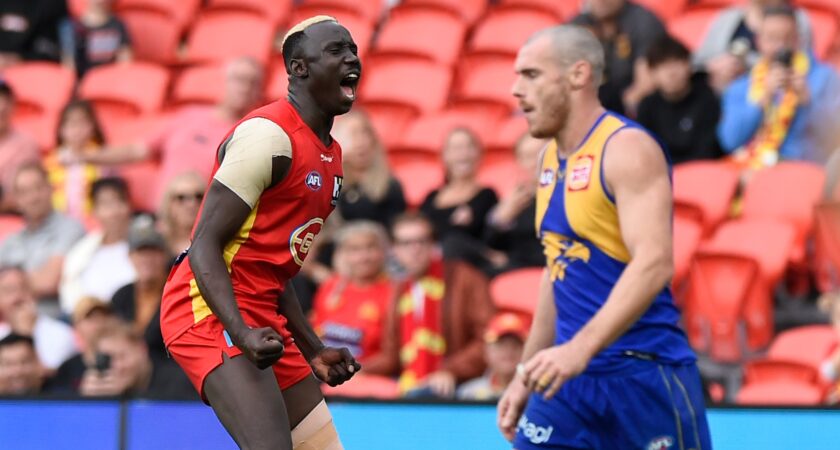 Twenty-six Queenslanders have now kicked five or more goals in an AFL game? Can you name them? And who have been quickest to kick a handful?

It’s a topical question this week after two more Queensland football products joined the club in Round 20 of the Toyota AFL premiership last weekend.

Mabior Chol, a one-time Yeronga and Aspley player, kicked five in his 50th AFL game for the Gold Coast SUNS as they beat West Coast at Metricon on Saturday afternoon.

And Noah Cumberland, originally from Maroochydore Roos, kicked five to add another highlight to an extraordinary month in the spotlight in Richmond’s win over the Brisbane Lions at the MCG on Sunday.

Cumberland, a Lions Academy graduate who played a key role in his first AFL win at the expense of his original club, pocketed his first five-goal bag in just his fifth AFL game. But he’s not the quickest.

The history books show three Queenslanders were quicker. Stephen Lawrence, originally from Mt Gravatt, kicked five goals on debut for Hawthorn at the MCG in 1988, and Ken Grimley, the 1964 Grogan Medallist from Wilston-Grange, kicked six in his second game (and first full game) for Fitzroy at Geelong in 1957. And high-flying Mayne star Dale Woodhall kicked seven in his third game at Collingwood at Victoria Park in 1984.

Chol, equal 8th on the AFL goal-kicking list this year with 43 goals in 19 games, continued to prove himself one of the recruits of the year in the Suns’ win over the Eagles.

He kicked two goals in the first quarter and two steadiers in the last as the visitors made a late charge and was rewarded with six votes in the AFL Coach’s Association Player of the Year Award. Only West Coast’s Jack Darling (9) and Gold Coast’s Touk Miller (8) polled more.

With three rounds to go Chol shares with Melbourne grand final hero Bayley Fritsch the distinction of kicking a goal in every round this season. He’s also on track to become just the second SUNS player to kick 50 goals in a season after Tom Lynch booted 66 in 2016.

But while nobody is surprised that Chol has been such a 2022 standout after showing good signs playing aside Lynch and Jack Riewoldt in the Richmond forward line in recent years, Cumberland’s rise to promise as Chol’s virtual replacement with the Tigers has been an amazing story.

His brilliant smother on Lions defender Darcy Gardiner in the closing seconds to set up the last goal for Lynch in Richmond’s win over Brisbane may have had Lions Academy coaches wishing they hadn’t spent quite so long on smothering drills during his Academy time.

It was hard to believe that moments after his brilliant defensive play he found himself pumping out the Tigers song to celebrate his first win.

It is equally hard to fathom that until Round 11 this year Cumberland was largely unknown in AFL circles outside Punt Road, which became home when he was drafted by the Tigers with pick #43 in the 2019 AFL National Draft.

His AFL debut against Sydney at the SCG in Round 11 was more a novelty story than a football highlight – he was playing in the reserves when he received a late call-up to be the medical substitute in the AFL side.

Even without getting on the ground he’d become player #1180 on a famous Richmond playing list which includes ex-West Coast Brownlow Medallist Ben Cousins at #1080, Justin Charles, the first AFL player to test positive for an anabolic steroid, at #980, former captain Jeff Hogg at #880 and premiership player Jimmy Jess at #780.

It’s been a meteoric rise since then. After starting his second game against Gold Coast at Metricon Stadium in Round 17 as the medical substitute the young man with a thumping left foot become a huge weapon up forward in Rounds 17-18-19-20, with 44 possessions, 11 goals and 19 scoring shots.

Cumberland was rewarded with the Round 20 nominated for the NAB AFL Rising Star Award and picked up two votes in the AFL Coach’s Association Player of the Year Award behind Richmond teammates Lynch and Shai Bolton (9) and Brisbane’s Keidean Coleman (6) and Eric Hipwood (3).

Coleman was another Queensland standout in Round 20 with the first 30-possession game of his now 35-game career. It was a performance made even more impressive when it was noted post-game that his absence due to full body cramping at times in the last quarter was a key turning point in the Lions last-gasp loss.

Also in the coaches votes in Round 20 was Adelaide’s Ben Keays, who found himself playing a key role in Adelaide’s upset win over Carlton at Adelaide Oval. Instead of his customary ball-winning role in the midfield the former Lions player, originally from Morningside, was deployed as a defensive forward on Carlton dangerman Adam Saad. And not only did he limit the effect of Saad but he had 21 possessions and kicked a career-best three goals. He polled seven coaches votes – equal with Rory Laird and behind only best afield Brodie Smith (10).

Peter is a consultant with Vivid Sport.