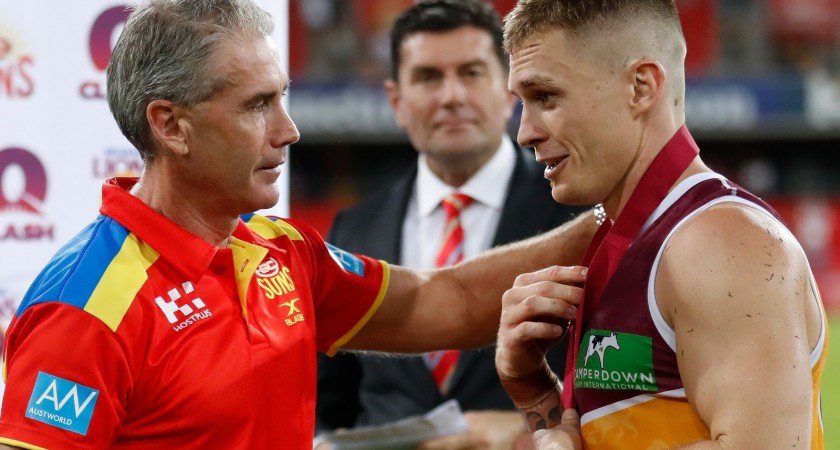 Dayne Beams made a triumphant start to his rein as Brisbane Lions captain on Saturday night, joining an elite group as he led the his young team to a watershed win over the Gold Coast Suns in QClash 13 at Metricon Stadium.

Beams was the first half mastermind of a win worth much more than four premiership points to a club heavily criticised for performances on and off field last season.

He had 21 of his 28 possessions to half time after the Lions had kicked the first seven goals of the game in one of the most withering bursts in QClash football.

So proud and pleased was Beams that he rated the first 20 minutes of the game the best football he had been involved with in a career that includes a premiership with Collingwood in 2010 and best and fairest awards with Collingwood and Brisbane.

Beams won the Marcus Ashcroft Medal on a countback from ex-Suns skipper Gary Ablett to follow Jonathan Brown and Tom Rockliff as Lions captains to win the award in a Lions win.

So clean with his hands and so efficient with his use of the ball, Beams had 14 contested possessions, five clearances and six tackles to stamp his leadership mark on the Lions playing group just as new coach Chris Fagan has done over the off-season.

It is a partnership which took the Lions to their first Round 1 win in five years, and has given credibility to off-season forecasts of hope and promise.

Beams was the leading possession-winner and most influential force among 21 Queenslanders in Round 1 of the Toyota AFL premiership.

Teammate Haris Andrews, though, proved it’s not all about possessions. Not at all.

Handed the key defensive assignment on Suns co-captain and gun forward Tom Lynch, Harris did a super job through the part of the match that ultimately proved decisive.

Although Lynch finished with three goals and was a factor as the Suns charged home Andrews took the honors overall with his close-checking defence on a player rated the equal of any key forward in the competition.

Promoted to the Lions leadership group in just his third season at AFL level, Andrews had a career-high 16 one-percenters to go with seven disposals and 83 Champion Data points.

Tom Bell (10 possessions and one goal) and Ben Keays (14 possessions) also played their part in a win which gave the Lions an 8-5 edge overall in matches between the two Queensland clubs.

Fremantle defender Lee Spurr earned 110 Champion Data ranking points for 26 possessions and nine marks in his side’s loss to Geelong in Perth, while teammate Lachie Weller was lively and had 23 possessions.

Geelong ruckman Zac Smith, who hasn’t played since sitting out the second half of the club’s final match in the JLT Community Series, was a late withdrawal after being set to play against Dockers giant Aaron Sandilands for the first time.

The third Queenslander to top 100 Champion Data points in Round 1 was St.Kilda’s Nick Riewoldt.

He had 14 possessions, seven marks and a team-high four goals in his 320th game.

More importantly, though, Riewoldt survived a massive scare when he jarred his knee late in the game and was carried from the ground on a stretcher.

Initially it was feared he may have ruptured his ACL, ending his season and potentially even his career, but club officials have since confirmed his knee is structurally sound, and were hopeful he would only miss “a few weeks”.

Charlie Dixon had 12 possessions, five goals and kicked 2-3 to earn 84 Champion Data points for an important role in Port Adelaide’s upset win over the Sydney Swans in Sydney.

Kurt Tippett had 10 disposals, 15 hit-outs and a goal for the Swans.

Braydon Preuss had five disposals, 19 hit-outs and a goal on debut for debut for North in a loss to West Coast, and in a Collingwood side beaten by the Western Bulldogs, Josh Smith had 20 possessions and Jesse White 18 possessions, eight marks and a goal.