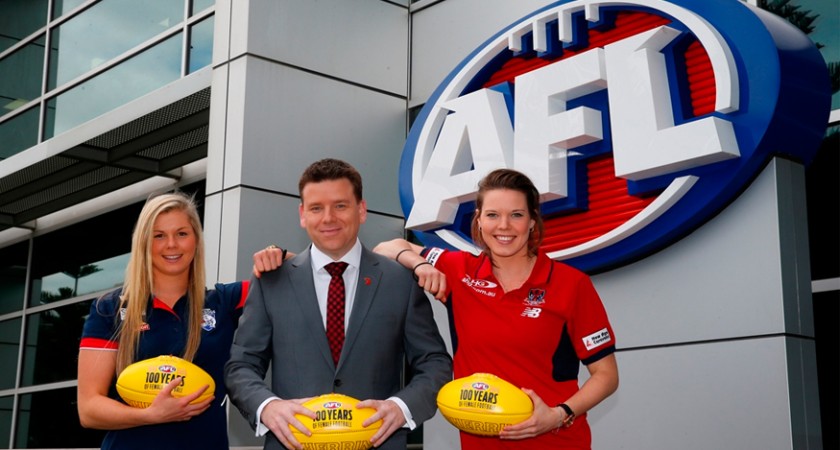 The AFL Website will live stream the Melbourne v Western Bulldogs women’s match from the MCG on Sunday May 24.

Jason Bennett will host and call both matches and is excited to be involved. He met Katie Brennan (Western Bulldogs) and Elise O’Dea (Melbourne) today.

“I was delighted to be asked to host and call these games as, having spent a significant period of time living overseas and travelling the world in recent years, I’ve seen that women’s sport can be so much more here in Australia than it is right now,” Jason said.

“My youngest daughter has recently fallen head-over-heels in love with footy, as we’ve lived in the United States for the last six years, so she was only a toddler when we left. I recently experienced the thrill of taking her to buy her first pair of boots and she literally wore them around the house every day for two weeks in the lead-up to her first Auskick session, just like I did when I was her age.

“So when I told her that I would be calling these games, her eyes lit up. ‘There’s a league for girls to play in?’ It made me realise that, as a boy, I always took it for granted that I would be able to play footy at some level for as long as I wanted to. I want our young girls to feel the same way and know that they too can play footy for as long as they want. These games are important at spreading the message that there’s a lot more footy out there to be enjoyed for girls once your Auskick days are over. You can stay involved in the game as much as you want for as long as you want, just like the boys.”

Tickets to the match are $15 for adults and children under 15 are free. Tickets available via ticketek.com.au

The match is one of two women’s games to be played this year. The return match will be played on Sunday August 16 at Etihad Stadium and will be broadcast nationally by the Seven Network. Broadcast details will be confirmed in the coming weeks.

The hashtag for the game will be #AFLWomensGame