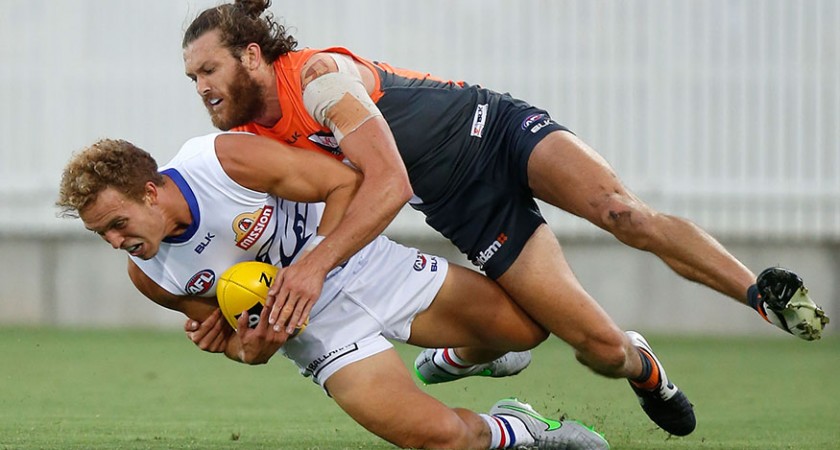 Sunshine Coaster Sam Reid is proving he hasn’t given up on an extraordinary return to the AFL two and a half years after he retired.

Reid, lured back as a player by GWS Giants coach Leon Cameron last November after applying for a coaching job with the League’s 18th club, was chosen last night as a Giants emergency Saturday’s clash with premiers Hawthorn at Spotless Stadium.

And while there is still a big hurdle to jump if the 26-year-old is to force his way into the side any time soon the fact that he is even in contention is a wonderful story.

But persistent shoulder problems which meant he was unable to do the work necessary to play in his preferred midfield role at senior level forced his retirement at the end of the 2013 season.

Instead he took up a development role at GWS and captained their NEAFL side, where he thrived as a mentor for the club’s younger players and starred as a permanent forward, kicking 54 goals in 32 games while also building his coaching credentials.

He had hoped to win the Reserves coaching job at the Giants this year but was prompted to change his thinking when senior coach Cameron asked him to think about playing again.

“The last year or so everyone joked about (me) getting picked up but when Leon actually mentioned it to me I thought he was taking the piss,” Reid told AFL.com.au.in February.

“I thought he was joking, it was a weird conversation and I started laughing,” he said at the time.

“Now I’m running around at training like a mad man, purely on excitement. I honestly can’t believe it, I didn’t think I’d ever play again.

“Two years ago if you had have asked me (about being on an AFL list), I never would have thought that I’d get another opportunity.”

The Giants selected Reid with their first pick in the 2016 rookie draft at No.8 overall in November, and after a good summer campaign and an excellent start to the NEAFL season he has become a wonderful example of sheer persistence and the approach needed by young players.

“I found a different perspective at that level. I was more about helping the young blokes than worrying about myself, and it helped me see the game differently,” Reid said in February.

“I reckon that helped me play a lot better and I don’t want to lose that perspective now.

“Blokes sh*t themselves about making mistakes and I used to do that as well. When I was on the list (previously) I used to panic and get flustered, and think about if I was going to get a game the next week.

“I think that’s one of the reasons I’ve played well over the past two years because I haven’t had that pressure. You’re going to make mistakes but you have to get over that as quickly as possible and get on with it.”

In the same interview Reid made no secret of his renewed ambitions – he wants to play senior football as the Giants, looking to repeat a win over Hawthorn at the same venue last year, push for their first finals appearance.

If nothing else his inclusion among the Round 6 emergencies is a little encouragement and the only significant Queensland news to emerge from selection last night.

Reid aside it was a quiet night on Queensland watch after debutants Aliir Aliir and Ben Keays had been confirmed inclusions in the Sydney Swans and Brisbane Lions sides respectively on Wednesday.

But with Richmond’s Shaun Hampson returning after being a late omission last week, the inclusion of Aliir and Keays for Sunday’s Swans-Lions clash at the Gabba it means a season-high 25 Queenslanders will play in Round 6 of the Toyota AFL premiership.

Interestingly, Keays debut means the Lions will field the biggest Queensland contingent of players under coach Justin Leppitsch in what will be Leppitsch’s 50th game at the helm.

The 19-year-old will join vice-captains Daniel Merrett and Dayne Zorko plus Harris Andrews, Claye Beams, Tom Bell and Liam Dawson in the home side.

And with Dayne Beams, yet another vice-captain, reportedly on track to return from injury next week that number could grow even further.